Tom Tammi
“"When I'm done at the podium, Mayor Ochoa is going to be dedicating half his annual budget to cleaning this problem up.”
— Bobby Jefferson

Bobby Jefferson is the former Secretary of Security Enforcement of the United States. Dying Gambetti Family Don Jon Gravelli hires Niko Bellic to protect Bobby Jefferson on his way to a speech warning the city of the threat presented by foreign gangs (and specifically the Russian Mafia) after arriving from upstate. Obviously, the Russians prepared an ambush, but Niko manages to keep Bobby Jefferson safe and drives him to City Hall, so that he can give his speech. Bobby Jefferson owns a black Emperor Lokus with a blue undertone. 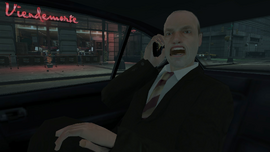 Bobby, talking to Jon Gravelli during the mission Entourage.