The trailer appears with metal framework and pads to hold boats in a secure position. It has a single axle with single wheels, with wheel arches fending them. The front of the trailer features a jockey wheel and brake. It also features nonfunctional orange lights on the main chassis.

The trailer can spawn with numerous boats on it, including the Squalo and Dinghy. Once the boat is detached, it cannot be reattached to the trailer.

The trailer has low durability and low center of gravity, meaning it is very agile and can bounce around under the right circumstances when driving at high speed. It also has a tendency to unhitch from the vehicle on hills. When the trailer is equipped with a boat, it poses a threat in cornering as the boat tends to cause the trailer to tipple over, due to the lack of suspension. The player can also stand on top of a moving boat trailer without the risk of falling off.[1] 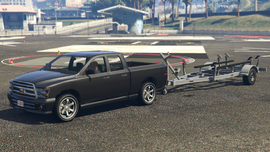