Francis McReary meets Niko to order the murder of his brother, Derrick

Lure
Tunnel of Death
I Need Your Clothes, Your Boots, and Your Motorcycle

In-game time
“This is Cain and Abel stuff, I'm telling you. Question is, which one of us is gonna be wandering the Earth with a mark on his head and which one's gonna be six feet under...”
— Derrick McReary

Blood Brothers is the final mission given by Francis McReary in Grand Theft Auto IV. It is unlocked after completing Derrick's final mission, Tunnel of Death and Gerry McReary's mission, I Need Your Clothes, Your Boots, and Your Motorcycle.

Francis sends Niko a text message telling him to meet Francis at a curb in Algonquin. Francis pulls up in a Landstalker and explains that he wants Derrick dead for "the good of the community", when in reality, Derrick is intending to leak incriminating information about Francis to a reporter, jeopardizing his career in the police force.

Francis is meeting Derrick at a park in Lancet to give Niko the opportunity to kill him. Later, Derrick contacts Niko to tell him about the meeting and voices his fear that Francis wants him dead and asks Niko to go to the meeting and kill Francis. Niko must choose between the two brothers, and for the second time, kill one or the other.

Niko drives to the park in Lancet. After Derrick's call, Niko will contact Francis again, who gives him instructions on where to take point. Niko must climb the scaffolding and get to the roof via the window cleaning elevator. He must then run up to the yellow marker, where he will get his sniper rifle ready to kill either Francis or Derrick.

If the player is going to kill Derrick, they can make sure to call Francis while on the roof, who offers to increase the hit payment from $10,000 to $20,000. Whoever the player kills, a cutscene will show either Derrick walking away slowly or Francis telling everyone to clear the area and fakes sadness over his brother who had just been killed. 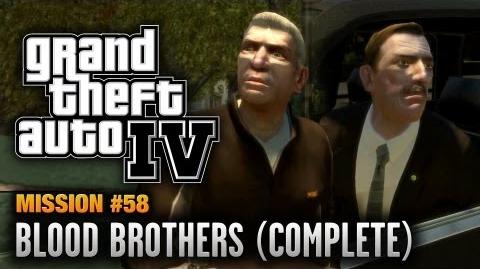 If Francis is killed
"Today, the LCPD is hungry for blood. They're out to find a killer who took one of their own, Deputy Police Commissioner Francis McReary. McReary was gunned down in a small courtyard park in Algonquin. He was apparently killed with a high-caliber rifle shot from some distance. McReary's recent career has been mired in controversy. Some news outlets claim they have evidence of bribe-taking and corruption by Mr. McReary, claims he strongly denied until his death. In an unrelated incident his brother, Gerald McReary, a convicted felon, was recently arrested again on racketeering charges."

If Derrick is killed
"Deputy Police Commissioner, Francis McReary, witnessed his brother's murder as he was assassinated in an Algonquin park. Derrick McReary, 52, had recently returned to Liberty City from Ireland. Before he had left the country, he had been registered as an informant with the LCPD and investigators are taking this as a likely motive of the murder. In unrelated news, a third brother, Gerald McReary, was recently arrested on racketeering charges."

If Francis is killed
"The Deputy Police Commissioner for Liberty City, Francis McReary, was gunned down in Algonquin earlier. Some were shocked that a member of the LCPD would be the victim of a gangland execution, but not those that knew what he was really like. McReary's own brother, a known associate of the Alderney mob, was recently arrested on racketeering charges. This news organization was approached by two independent sources wishing to expose photographic evidence of Francis McReary's taking bribes. Soon after they made contact, however, both men were mysteriously murdered. One of these men was lawyer Tom Goldberg."

"Sources within the LCPD have alleged that McReary was willing to take justice into his own hands in order to get his department's case clearence level up. In the weeks leading up to his death, this website had been attempting to get a comment from McReary on all of these accusations. He did not respond to our requests. Now, it seems, he will take the secrets of his corrupt reign of terror to his grave."

If Derrick is killed
"The Deputy Police Commissioner for Liberty City, Francis McReary, stood by while his brother Derrick was shot in Algonquin earlier. Some were shocked that a brother of a senior member of the LCPD would be the victim of a gangland execution, but not those that knew what the McReary family is really like. Derrick McReary, 52, had recently returned to the US from Ireland and was himself caught up in organized crime. Some believe he may have been trying to blackmail the Deputy Commissioner who himself saw his brother as a liability. Another brother, Gerald McReary, a known associate with the Alderney mob, was recently arrested on racketeering charges."

"This news organization was approached by two independent sources wishing to expose photographic evidence of Francis McReary's taking bribes. Soon after they made contact, however,both men were mysteriously murdered. One of these men was lawyer Tom Goldberg. Sources within the LCPD have alleged that McReary was willing to take justice into his own hands in order to get his department's case clearance level up. In the weeks leading up to this brother's death, this website had been attempting to get a comment from McReary on all of these accusations. He has so far not responded to our requests."

If Francis is killed
"Liberty City's Deputy Police Commissioner, Francis McReary, was ruthlessly gunned down earlier. To most of us he is a hero, a man dedicated to serving the city who was taken before his time. Liberal "Blame America First" news outlets have been sullying the man's reputation. Rather than celebrate this patriot's great career, they dig up some unsubstantiated accusations of corruption. Francis McReary valiantly served Liberty City until he was murdered. We should remember him as an American Hero."

If Derrick is killed
"Deputy Police Commissioner, Francis McReary, witnessed the murder of his elder brother in Algonquin. His brother Derrick was assassinated by a sniper while the two men enjoyed a catch up in a city park. Francis McReary has risen through the ranks of the police force and been a vocal proponent of law and order throughout difficult times for the city. He has strongly denied spurious allegations made against him."

"Although Mr. McReary has never tried to hide his tough Dukes upbringing, nor a family background with links to organized crime, he himself has always stood tall as a community leader and we mourn with him in this time of sorrow."

If Francis is killed
"A policeman is dead and the city mourns."

Mike Whitley: "Deputy Police Commissioner Francis McReary was shot dead in Algonquin. Although there were rumors of corruption surrounding Mr. McReary, many believed he was a fine officer who served the city well through difficult times. In an unrelated incident, Mr. McReary's brother Gerald McReary has been arrested on an outstanding warrant."

If Derrick is killed
"It's a bad day for Deputy Police Commissioner Francis McReary."

Eric House: "McReary's older brother Derrick was shot in front of him and his younger brother Gerald has been arrested in Alderney on racketeering charges. As if that wasn't enough, Public Liberty Online, a liberal opinion website is throwing corruption allegations at him."

Derrick contacts Niko before the meeting, asking to have Francis killed instead. If the player ignores his first call, Derrick will send a text message instead.

The brothers meet as Niko looks on from a rooftop.