GTA Wiki
Register
Don't have an account?
Sign In
Advertisement
in: Stubs, Missions in GTA San Andreas, Side Missions,
and 2 more
English

Drive through the checkpoints to increase your overall time above the target time before it reaches zero.

The premise of Blood Bowl is very much similar to Bloodring in GTA Vice City. Using a Bloodring Banger, the player is required to collect small fractions of time for a constantly decreasing timer via a randomly placed checkpoint around the arena until they collected enough time to complete the side-mission. The player is challenged by 20 other competitors whose primary goal is to ram the player's car and hinder the player's progress, while snatching up the checkpoints themselves. The player begins with 30 seconds in the timer, with each checkpoint worth 15 seconds. If the player runs out of time or destroys their car, the player fails the mission.

However, Blood Bowl's gameplay formula has been modified, drastically increasing the difficulty of the mission. Players must now have a sufficiently high driving skill (at least 20% full) to enter. Each Blood Bowl contestant is now accompanied by a random MP5-armed passenger, whose primary goal is to perform drive-by shooting against other contestants. Opponents are now more aggressive and will dart to checkpoints much quicker than before; instead of Bloodring Bangers, the opponents will also drive conventional cars (i.e. Primos, Sentinels, Bravuras, Fortunes, etc.), some of which may be superior performance wise, to the player's disadvantage. Spinning pickups marked with a wrench are also available only to the player to repair the player's car.

Much like Bloodring, the player is initially required to accumulate 1 minute worth of time to pass the mission. By successfully completing each stage of Blood Bowl, another minute is added to the required amount of time the player must collect in the next playthrough.

Completion of the first stage of Blood Bowl is required for 100% completion.

The base reward for completing Blood Bowl is $10,000, multiplied by the number of minutes the mission requires the player to accumulate. In addition, a Bloodring Banger will spawn outside Corvin Stadium, next to the football sculpture, upon completion of Blood Bowl for the first time. 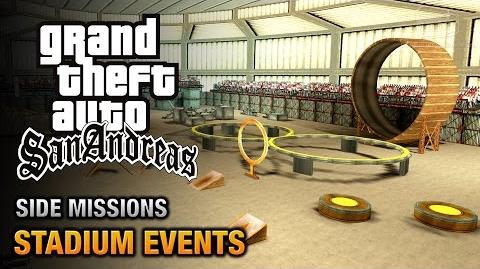