GTA Wiki
Register
Don't have an account?
Sign In
Advertisement
in: Gameplay, Features, Features in GTA 1,
and 13 more

Blood is a graphic featured in all GTA games.

Blood in GTA and GTA 2 is not very detailed, appearing as only dark red pixels left on the ground. Blood does not appear in the PlayStation and Game Boy Color ports of GTA 2, both of which were rated T. The same applies to the GBC port of GTA.

Blood has improved in the 3D Universe. Dead victims will leave a large pool of blood on the ground (no matter what is used to kill them), leave small blood spots when shot or attacked, and if the player runs over them on foot or runs dead people over with a vehicle, it will leave bloody footprints or tire marks. In Grand Theft Auto III, it is possible to dismember people, but this is only enabled by default on the PC version; a cheat code can be used on consoles to enable the same effects.

In Grand Theft Auto IV, blood has been greatly improved. Now gun shots or blood can be seen on protagonist's or NPC's clothes, bullet impact blood "spray" has been greatly improved too, spots of blood will be left on the ground from bullets or collision with the environment. Also, the pool of blood has been improved, now it runs from the dead body depending where it got damaged the most.

Blood has appeared again in Grand Theft Auto V, having similar mechanics to GTA IV blood. The blood now is much more detailed and has realistic flowing dynamics and reflections. The bloody footprints and tire marks have returned from GTA III and now windscreens may get covered in blood if a victim dies inside a vehicle.

Blood can be seen when causing major damage to a person, eg: running them over heavily, or shooting them. Blood cannot be seen in minor injuries, unlike previous games. Blood that is sprayed on a car will cause blood to form on surfaces behind. If a corpse falls into water, the corpse will leave a pool of blood behind them in the water. Blood remains the same in all versions, but with quality and reflections upgraded (PS4, Xbox One and PC).

The player standing by the FBI Agent with blood by his head in GTA III. 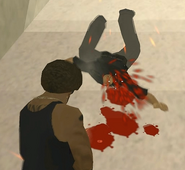 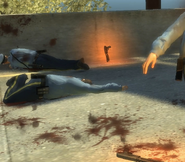 Blood after a corpse falls in the water.
Community content is available under CC-BY-SA unless otherwise noted.
Advertisement