• ­Get in the garbage truck. (Michael)

• ­Plant a sticky bomb on the rear doors of the truck.(Franklin)

• ­Take out the NOOSE reinforcements coming from the rear alley. (Michael)

• ­Take out the police reinforcements coming from the main road. (Franklin)

• ­Shoot down the helicopter. (Trevor)

• ­Get in the garbage truck. (Franklin)

• ­Go to the getaway location. (Franklin)

• ­Get away from the garbage truck. (Franklin)

Mr. Richards
I Fought the Law...
Death at Sea

Franklin: "So we really finna do this shit? We're finna risk our lives to rob some motherfucking government killers again?"
Michael: "Yup."
― Michael De Santa and Franklin Clinton prior to the heist.

Blitz Play is a mission in Grand Theft Auto V. It is the third heist mission in the game that protagonists Michael De Santa, Franklin Clinton and Trevor Philips execute.

Michael: "Alright... the fuck is this bullshit? We handled your little immigration problem or whatever the fuck it was. We're straight."
Haines: "Oh absolutely... yeah, yeah. You killed people, you tortured people, committed a litany of other crimes... Oh we're so straight you and me, we're arrows."
―Michael De Santa and Steve Haines.

Michael, Franklin, and Trevor meet up with Steve Haines, Dave Norton, and Andreas Sanchez at the Murrieta Oil Fields to discuss business. Once there, Haines and Norton tell the protagonists that the FIB want to rob the IAA. The target: an armored car filled with funds the Agency earned from drug sales. Haines wants the trio to "requisition" those funds for the Bureau. After the agents leave, Michael comes up with a plan: "classic blitz play." He lays out the general approach, then the team splits up. Soon, Michael makes a conference call to his two partners with more details. This unlocks the heist setups missions with each contact point marked as HS on the map. The protagonists will need:

The protagonists can engage in other activities and missions between the set-up missions.

After the three exchange pleasantries, Michael outlines the plan. Trevor needs to find an elevated perch and serve as the lookout, notifying the other two when the security truck is nearing the site of the attempted robbery so they can block the road.

The job starts with the player controlling Trevor in a first-person view as he looks at the oncoming traffic through a pair of binoculars to locate the armored truck. Once he spots it, the camera zooms out and places the player in control of Michael in the garbage truck, who maneuvers the vehicle to block the entire street.

When the garbage truck is in place, a cutscene shows the armored truck approaching the roadblock and screeching to a halt with the occupants commenting negatively on it. Now the camera jumps to Franklin's first-person perspective behind the wheel of the tow truck coming down an alley. Franklin gives a heavy foot on the gas and rams into the target vehicle at full speed. Another cutscene shows the powerful impact of the crash, which tips the armored vehicle on its side.

The player stays in control of Franklin, who walks over and places explosives on the back door of the overturned truck. After detonation, Michael joins Franklin and the guards emerge with their hands up. The alarm goes off quickly, and police sirens scream in the distance. The team does not have time to collect all the cash, so they take defensive positions and wait to open fire on the LSPD. At this point in the mission the player is given the ability to swap between Trevor, who is carrying an RPG, and the two other characters, who are both armed with machine guns near the truck.

After disposing of several waves of cops and their snipers, a brief reprieve allows the rest of the crew to escape offscreen and while Franklin escapes to the placed getaway vehicle. He then blows up the garbage truck in order to destroy evidence and gets into the getaway vehicle. After Franklin feels safe, he contacts Michael and is informed that Michael is on his way to drop off the score. The game then switches to Michael as he drives to the drop-off point. Michael drops off the bonds and begins to speak with their contact. The contact then persuades Michael to get his "crew" (Trevor and Franklin) to collect five cars for him in exchange for him allowing Michael to work with Solomon Richards and a massive cash payout for each member of the crew.

"A Gruppe Sechs armored car being used by the IAA to transport bonds was raided yesterday and the mainstream media refuses to call it what it is, a terror attack. The IAA do important work bolstering American imperialism around the globe, and any attack on them is an attack on the rich white U.S. citizens who enjoy the cheap oil, and manufactured goods that ill-gotten global dominance can bring."

"Gruppe Sechs armored car robbery connected to IAA. In a rare public statement, IAA spokesperson Lucinda Jacob confirmed the connection between her agency and the robbery of a Gruppe Sechs armored car in Cypress Flats. She told us she could confirm the car was carrying high value government bonds. But was unable to tell how much, where they were going or any success in solving the crime."

Franklin meeting up with Michael.

The Trashmaster blocking the road.

Franklin about to ram the Securicar.

Ramming the Securicar with the Large Tow Truck.

Another view of the Securicar being rammed.

Blowing off the doors.

Michael cleaning up the van.

Franklin taking cover behind a Vapid Interceptor during the mission.

Trevor shooting down snipers on rooftop.

Franklin getting in the Trashmaster.

Franklin driving to the getaway vehicle.

Franklin in the getaway vehicle.

Switches automatically from Franklin to Michael after the phone call.

Michael handing the package obtained from the Securicar to Devin Weston.

Mr. Richards (S) and I Fought the Law... (D) unlocked after the mission.
Add a photo to this gallery 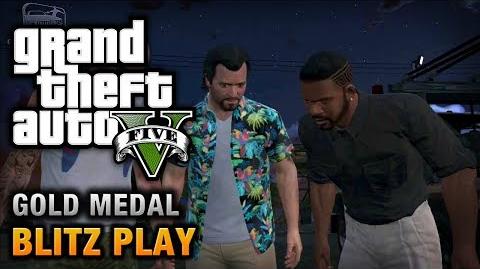 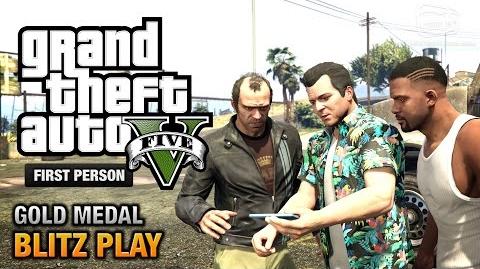 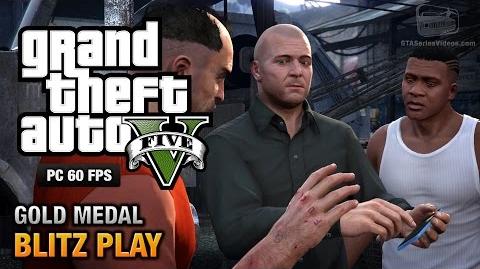 Retrieved from "https://gta.fandom.com/wiki/Blitz_Play?oldid=1249309"
Community content is available under CC-BY-SA unless otherwise noted.