The Dinka Blista Kanjo (ブリスタ・カンジョ, Burisuta Kanjo) is a three-door hatchback featured in Grand Theft Auto Online as part of the continuation of the The Diamond Casino Heist update, released on February 20, 2020, during the Blista Kanjo Week event.

The Blista Kanjo is an amalgamation of several 1990's Honda cars. It is mainly based on the Honda Civic Type R EK9, with the tail lights derived from either Honda Today or Honda Logo, while the front of the car seems to resemble the Honda Integra SJ. The front bumper, although taken from the EK9, features a distinct grille and splitter that can be traced back to the Honda Integra Type R. Furthermore, the engine model in the vehicle strongly resembles the B16B engine that powers the EK9.

The vehicle follows the general profile and layout from the Blista and the Compact variant, with a design that seems to be derived from both (the rounded design from the former and the length from the latter). Its front end features a plastic grille surround, and two large headlamps and turning signals on either side. The bumper is predominated by the central intake, the two smaller ones on the sides and the plastic splitter at the bottom.

The sides of the car are quite simple, featuring a slightly protruding line between the wheel arches, along with plastic skirts. The cabin area features thin plastic trims around the windows and a plastic roof spoiler above the rear window.

The rear end assumes a simpler pattern, where the boot area features a concaved section for the license plate and two large tail lamps. The bumper also features a plastic detail at the bottom, and the single exhaust is visible on the passenger side.

The interior uses the "Feroci" dial set and interior used on various cars, such as the Habanero and the Intruder. However, unlike most vehicles with the same interior, the horn cap bears the manufacturer's emblem.

Most of the car's bodywork is painted in a primary colour, while the rear-view mirrors and interior stitching are painted in secondary. It uses "Rally Master" tuner wheels, which are also available at Los Santos Customs.

The Blista Kanjo has immense body roll when turning, making it difficult to maintain control around even the lightest corners and oversteer is quite present without full suspension upgrades. However, it makes up for its drifting capabilities, able to take corners easily in the hands of a skilled driver. One should note that due to the excessive wheelspin, the car may take a few seconds to start moving unless the player slightly pushes the throttle input. The car is capable of performing J-turns rather easily, given the right power and timing.

The Blista Kanjo is powered by a 4-cylinder engine laid transversely, coupled to a 5-speed gearbox in a front-engine, front-wheel-drive layout. It is possible to add a turbocharger via modifications, although it is an aesthetic option and does not improve its performance, unless the actual "Turbo" modification is installed. 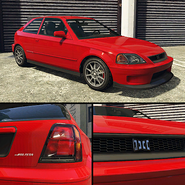 The Blista Kanjo in the cinematic preview on Rockstar Games Social Club.

Side view of a green Blista Kanjo. 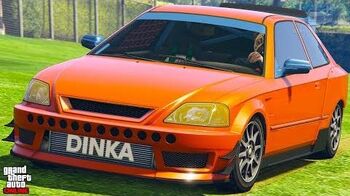 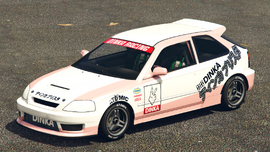 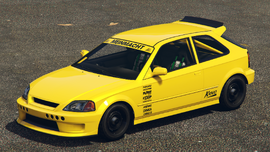