View source
watch 02:52
Roblox: DeepWoken - The Loop
Do you like this video?
Play Sound
For the modern counterpart, see Blista.

GTA IV
“Looks can deceive. The Blista's a small, ugly hatchback, but it's got something special under the hood - a V6 front wheel drive to be precise. Drive it round the city, try not to crash, and don't expect to meet the love of your life... unless they're really faded.”

“Imports? They'll be the death of this country.”

Throughout the 3D Universe, the Blista Compact remained identical in body shape and distinct features, evidently influenced by the first generation Honda CR-X in the side profilling, bumpers and greenhouse area.

The front end appears to assume a flatter profile with a grille of the same height as the headlamps, with a large bumper featuring small fog lamps and a small lip/splitter at the bottom. The rear appears to use a set of red lights connected by a light strip on the center.

The car has a two-tone paint job in GTA Vice City, with the bottom half always painted dark gray, but in later games feature a variety of colors in all-over and two-tone style. The car does have markings on the left side of the trunk, but letters are in too low quality to be legible to read.

In Grand Theft Auto IV, the car stays true to the Honda CR-X, but has a greater poly build making the car more realistic. The front retains the same light setup, but the turn signals were moved from being next to the headlights to be underneath them, replacing the fog lights of the 3D Universe iteration. The rear light units closely resemble the ones from the CR-X, with the central case/light bearing the car's name in a similar manner to the one on the CR-X.

The car may spawn with additional parts, such as a set of foglights, a sunstrip, a covered boot interior and wide side skirts. The roof may have either a solid panel, a glass sunroof or an open sunroof, while the boot may have a black spoiler, a primary-coloured black spoiler or none. The exhaust can have a single exit or a twin exit. The spoiler and twin exhaust will make the car look similar to a CR-X SiR. The bonnet always appear with a small vent on the passenger side.

Colour distribution is the same as in the 3D Universe, with the primary one applied on the upper side and the secondary one on the lower side. The vehicle uses a unique set of wheels, consisting of a large dish with eight wide spokes, leaving small holes around it.

The Blista appears with the same design as in previous games. In the Nintendo DS version, the car has a somewhat older look, while in later versions, the front seems to be a combination between the 3D Universe and the GTA IV iterations, albeit lacking extra lights on the front bumper. A spoiler may be present on the rear.

The car re-appears in the PlayStation 4, Xbox One, and PC version of Grand Theft Auto V and Grand Theft Auto Online, with the same design as in GTA IV. Again, the vehicle may appear with a glass sunroof or a solid panel. The vent on the bonnet has been removed, although it can be restored via customisation, along with the rest of the vehicle's extras. The front bumper contains the same set of fog lights (although they are now functional), which were made unremovable in the Heists Update.

The interior design of the Blista Compact is exactly the same as the Futo, albeit with the Dinka logo on the steering wheel and lacking the "FUTO" patterned door cards. It originally included the word "FUTO" on the tachometer, but this was later removed with the Heists Update.

Its colour distribution remains the same. The vehicle also retains the same wheel design, which resemble the "El Jefe" muscle rims available in Los Santos Customs, but the centre of the rim does not have a protruding detail and has only four bolts around it.

The vehicle is powered by a high revving, twin cam 1.4L four-cylinder engine according to the badges, in an FF drivetrain layout, transversely laid, giving it a high top speed. The smooth 5-speed transmission and light weight means it accelerates rather quickly. It is stated to have "Invariable valve timing", meaning the valve's opening periods are synchronised to gain a smooth flow of air and fuel-release, thus giving better performance results. The Blista Compact is the second lightest car in GTA IV (the Uranus being the lightest).

The stiff suspension gives it taut handling, paired with the fast acceleration and top speed. Braking is relatively good, partly due to its light weight. The body is relatively resistant to collisions, and for its size, the engine is durable; however, it still cannot sustain much gunfire or collisions before the engine dies out or catches fire.

It is also very easy to park due to its high manoeuvrability, and can spin around with one rear wheel in place, while in reverse, and is able to execute the Spin and Go manoeuvre.

While the standard singular hood vent mounted to the right side of the vehicle is intended to carry air into the intake manifold of the engine, the engine is in fact transversely laid, meaning the hood vent is out of alignment and therefore does not serve its purpose correctly.

The Blista Compact is powered by what is stated to be a small V6 on the website (before the Ill-Gotten Gains Part 2 update), which outputs respectable power. However, its engine model is a twin-cam Inline-4, laid transversely in a front-engine, front wheel drive configuration. Also, the engine sound is shared with the Monroe, Bifta and Kuruma, implying it is turbocharged.

Overall, its performance is more comparable to a compact car than the Sports class it is put in. It has above-average acceleration, but a top speed which is lacking. At low speeds, the front wheel drive makes the Blista Compact feel very responsive and engaging, but it suffers from noticeable understeer at high speed. The car handles acceptably well, but does have occasional bouts of oversteer. Crash deformation is acceptable, and it is able to take a few decent hits before being disabled. Any major hit to either of the front wheels has a strong possibility of jamming the wheels, and immobilizing the car, so colliding into hard objects should be avoided where possible.

The Blista Compact can only be modified in a TransFender garage.

The wrecked and undrivable version of the Blista Compact.

A Blista Compact with a luster that can be obtained from Drug Wars. 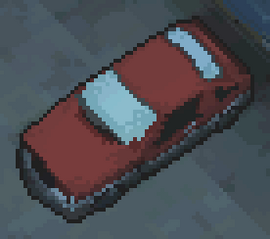 The Blista in the Nintendo DS rendition of GTA Chinatown Wars. 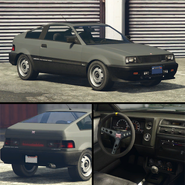 The Blista Compact on the updated Rockstar Games Social Club.