View source
Not to be confused with the two original versions, the Atomic Blimp and Xero Blimp.

Standard White - 100%
“This may be the age of targeted Lifeinvaders ads, but when it comes to large scale public advertising, there is such a thing as a winning formula: get a huge balloon of highly flammable gas, put the name of your nightclub on the side, fly it low over the city, strike a match, and wait for the headlines to come to you.”
— Elitas Travel description.

The Blimp is a semi-rigid airship featured in Grand Theft Auto Online as part of the After Hours update, released on July 31st, 2018, during the Tale of Us Residency Week event.

The Blimp appears as a regular counterpart of the Atomic Blimp and Xero Blimp, being simply named "Blimp". It shares the same cabin design and features from the aforementioned counterparts, but has two large speakers are attached on the rear, as it is meant to promote/advertise.

Players must select one of eight different liveries for their purchase, the eighth one corresponding to the name of their Nightclub. Even though this cannot be seen in-game, a primary color is applied to the cabin/gondola and the rear fins, and a secondary color to the envelope/main body. It shares the same wheel design as the Atomic and Xero blimps, being plain industrial wheels derived from aircraft such as the Cuban 800, the Mammatus and the Velum.

The Blimp appears to perform identically to the Atomic Blimp and thus slightly slower than the Xero Blimp, both being very heavy blimps with a large amount of drag. It can be noted that the aircraft is just as weak as any other civilian plane and only appears to be more durable during its use in missions.

The aircraft is powered by two piston engines located on each side of the cabin/gondola, which produce a rather quiet sound in a similar manner to its Atomic and Xero counterparts.

Similar to most aircraft featured in the Smuggler's Run update, the Blimp is equipped with the Flare countermeasure. It drops various flares from around the rear of the aircraft, which can "disorient" the homing missile in order to avoid chasing the aircraft. They have a delay of three seconds before being used again, but have unlimited capacity.

The blimp cannot be modified, as it is a Pegasus vehicle and cannot be transfered to the player's personal hangar; however, the player can choose from eight different liveries, with the last being the Nightclub-named livery.

The Blimp on the updated Rockstar Games Social Club.

The Blimp in a cinematic preview on the Rockstar Games Social Club. 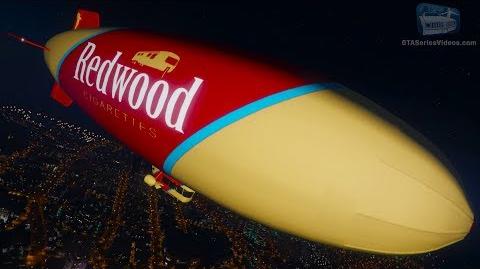 During a Nightclub Management mission, the Blimp may spawn with an exclusive "DJ" livery. As such, they are unobtainable, and the livery depicted on the Blimp is depended on the player's current Resident DJ.