Roman: "These guys think that they're better than me. They think they can fuck me around and beat me up because there are more of them. Not any longer. Me and you, Niko, me and you are going to show them. Fucking Dardan smashing my fucking stuff. Who does he think he is? Just some fucking petty Albanian hood. If I wanted to buy a stolen TV I'd go to Dardan. Who does he think he's fucking with? Bellic Enterprises, that's who. We're going to the top, Niko, the top."
Niko: "For now, let's just try to survive, cousin."
―Conversation between Roman and Niko while chasing Dardan.

Bleed Out is a mission in Grand Theft Auto IV given to Niko Bellic by his cousin, Roman Bellic. The mission introduces melee fighting techniques, including punching, kicking, dodging and disarming. Note that this mission will immediately start after the phonecall from Roman, if the mission First Date was completed.

As the player nears Michelle's place for his first date, Niko's cousin calls to ask him for help; the Albanian Mafia loan sharks have him trapped on the basketball courts in the Firefly Projects. The player can choose to either ignore this call completely (in which case the above is not heard), decide to ignore Roman's call for help and continue with dating Michelle, or skip the date and attend Roman (if this happens Niko will later apologize to Michelle and will have another chance to date her).

If either of the first two options are chosen, following the date with Michelle Niko receives an angry phone call from Roman telling him to pick him up at the hospital and drive him to the taxi depot. This adds an extra task, but is not considered part of a mission (i.e. there is no reward for doing this). Soon after returning Roman to the depot, Niko will receive another phone call from Roman indicating that Roman is under attack (again) at which point the mission proceeds as it would have had Niko skipped the date earlier.

An onscreen tutorial walks the player through melee combat techniques. The player must defeat Bledar and then Kalem in hand-to-hand combat. It is also possible to pick up the baseball bat in front of the Hove Beach Safehouse (it can be found on the weapons map). The player can beat up Bledar and Kalem with this weapon in the mission or Niko himself may also ram through the fence with the vehicle he has and run them over. Another alternative is to take the shotgun from the police car that spawns at the Hove Beach Police Station close to the Safehouse, then shoot Kalem and Bledar instead.

After fighting off Bledar and Kalem, Dardan waves and gets in his car (beige Willard).

Dardan has abandoned his car. He's escaping on foot up the staircase.

The chase eventually leads to BOABO, where Dardan stops, gets out, and flees up a flight of stairs into a large room, bordered by floor to ceiling windows.

When the player enters the room, Dardan will draw a knife and attack the player. At this point, the game provides instructions on how to disarm an enemy, prompting the player to take Dardan's knife and use it against him. The player can also simply beat Dardan until he crawls over towards a window; hitting him again will trigger a small cutscene in which Dardan falls through the window, onto an overhang, and into the Humboldt River, though the fight is considered over even if this doesn't happen; Niko is considered to have won if the on-screen instruction to return to Roman's car appears.

Get in Roman's car.

Whichever method is used, once Dardan is dead/disabled, Niko must return to Roman, and drive him back to the cab depot. 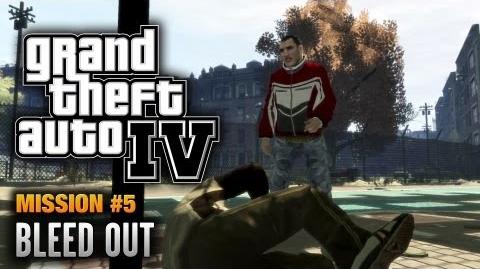