“Gazing at the sea, speeding through the sand, resuscitating a beautiful stranger with one hand and punching a shark in the face with the other. Let all your lifeguard fantasies come true with the Nagasaki Blazer Lifeguard, the ideal quad for traversing the beach.”

The Blazer Lifeguard is based on the Honda Fourtrax 250, specifically models prior to the 2000, seen in the straighter fenders, small black extensions and the central headlight (though the Blazer Lifeguard houses one within the body rather than mounted over the handlebars).

The vehicle is an utility variant of the Blazer used by the Los Santos Lifeguard, sharing the same chassis, handlebars and suspension setup. However, it features a larger, taller front guard with a black color, while the bodywork assumes a wider profile with bulky fenders, carbon-fiber wells and brown mudguards. The vehicle is also fitted with black racks on both ends, with the front one having a flotation device and the rear one having a small first-aid box, both strapped to the vehicle. Unlike the regular Blazer, the engine bay features full silver/chrome frames around the engine, the exhaust muffler is seen on the right side and lacks a license plate.

Being a Lifeguard vehicle, the Blazer only spawns in a red livery with "Lifeguard" markings in yellow and smaller "Rescue" markings in white, along with black "Blazer 4x4" markings on the sides. It also retains the same wheel design as the regular Blazer.

The Blazer Lifeguard, like the regular version, has good acceleration and good traction. However, the increased weight and the reduced top speed makes it rather inferior for extreme off-roading, as it cannot lean as much as the regular version, but makes up for being a bit more durable against collisions.

Like the regular Blazer, the Blazer Lifeguard appears to be powered by a parallel-twin engine, coupled to a 5-speed gearbox and powering all wheels, with a power distribution of 20% to the front and 80% to the rear. It shares the same high-revving engine sound from the Blazer and the Sanchez.

The Blazer Lifeguard cannot be modified in Grand Theft Auto V. However, it can in Online, although with basic options. The underlying primary colour can be changed but the red livery stays in place and may be affected by changes in colouration (e.g. dark colours may change the livery into darker shades of red).

A Blazer Lifeguard parked next to a lifeguard stand.

The Blazer Lifeguard on the updated Rockstar Games Social Club. 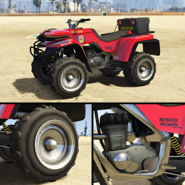