"It takes thousands of years to build up a delicately balanced ecosystem of island-dwelling flora and fauna. And it'll take you roughly one lap of this stunt race to leave pretty much nothing alive except a partially deafened sea-turtle. Lap race for the Blazer Aqua."
―Race description.

Island Hopping is a Special Vehicle Stunt Race featured in Grand Theft Auto Online as part of the Cunning Stunts: Special Vehicle Circuit update. It is locked to the Nagasaki Blazer Aqua and is available for up to 16 players.

The race is a 28 checkpoint long Lap race, default to 2 laps. 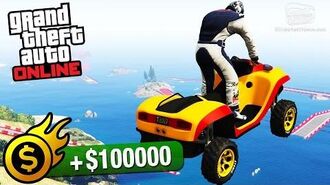 Retrieved from "https://gta.fandom.com/wiki/Blazer_Aqua_-_Island_Hopping?oldid=1275484"
Community content is available under CC-BY-SA unless otherwise noted.