Standard White - 100%
“If you're a farmer in one of the close-knit communities on the shores of the Alamo Sea, chances are you're congenitally blind. But apart from that it's your lucky day, because not only does Nagasaki's latest quad come with twin front-mounted machine guns, it's also fully amphibious, so you can career off the road and into the highly infectious water without a second thought.”
— Warstock Cache & Carry description.

The Nagasaki Blazer Aqua is an amphibious quad bike featured in Grand Theft Auto Online, as part of the Import/Export update.

The Blazer Aqua is evidently based on the Gibbs Quadski, sharing the same profile, hull shape and the ability to travel on both land and water.

The vehicle is an amphibious variant of the Blazer that assumes a completely different design, where the front has an elevated black hull with a small chrome-black defense spanning the front area. The upper side features an elevated compartment housing a small inset grille on the center and two long rear-view mirror wings, while the sections beside it houses two circular headlights.

The middle section mainly consists of the black seat and the side steps, which are part of the entire bodywork. The area behind the front elevated compartment is predominated by the black housing forthe handlebars, which also eatures a single "Sports Bike" speedometer derived from bikes like the Akuma and the 801.

The rear section is mostly squared and features what looks like a black rack with tow frames on it. The rear end consist of a central section housing the tail lights on the sides and the license plate on the center, while the exhaust tips are seen just below the license plate. The lower area has a small nozzle intended for propulsion and steering of the quad bike while on the water.

The primary color of the vehicle is applied on the main body, while the secondary color is applied on the elevated front compartment, the details on the front and sides, and the rear panel containing the tail lights and license plate. The vehicle uses a set of six-spoke rims with split ends, wrapped in high-profile tires with circular lumps in them. The wheels can be also retracted or deployed.

The vehicle is armed with two machine guns just below the headlights.

As expected, the Blazer Aqua has the ability to travel on both land and sea, making it very useful and practical. On land, the Blazer Aqua is reasonably fast and has a very good turning circle, although it is prone to spinning out when driving fast due in part to its short wheelbase. While it does function on water as its name suggestions, its top speed is noticeably slower in water than it is on land, although it is still good enough to keep up with and even outrun boats in the game. Although it is not mandatory to retract the wheels while on the water, it is worth noting that retracting the wheels reduces drag, which is a key feature in races.

The vehicle is powered by a small engine, coupled to a 6-speed gearbox and powering all wheels with equal distribution. Its engine sound is similar to that of the Street Blazer.

Machine Gun: The vehicle is equipped with two front-facing machine guns operated by the driver, which work similarly to the mounted machine guns found on the Buzzard Attack Chopper and the Annihilator. They have decent firepower against players and vehicles with none or light armor, but will struggle against heavily-armored vehicles. 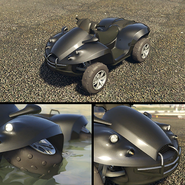 The Blazer Aqua on the updated Rockstar Games Social Club.

The Blazer Aqua in the cinematic preview on Rockstar Games Social Club.

HUD Icon for putting the wheels up.

HUD Icon for putting the wheels down.

A Blazer Aqua on the water.

Ditto, with the wheels down.