The Blazer has similar body styling elements to those of the 2012 Yamaha YFZ450, but featuring an aftermarket grab bar and sporting handlebars with no coverings.

The Blazer is distinctive for its small bodywork over a small chassis, where the front features a small guard on the front end protecting the front axle, while the upper area is occupied by a triangle-shaped section fitted with small fenders and a single rectangular headlight (which uses the Sanchez light texture). The front wheels are supported by dual articulated frames, with the lower ones being supported by large shock absorbers and suspension springs seen right below the front section of the bodywork. Within the front axle, there is the steering mechanism.

On the middle section, the vehicle features sharp fairings on the sides that partially cover the intercooler, while the upper area features large handlebars with dual supports and a central frame between these, along with a chrome fuel cap and a black seat reaching up to the whole rear section. The engine bay features chrome and black frames around the engine, along with grilled sections over the front intercooler and a lower plate cover below the engine. A single exhaust pipe can be seen on the left side, with the exhaust manifold located on the front.

The rear area makes use of wide rear fenders, a single tail light and a license plate below the rear section. The rear solid axle is connected to the vehicle by a single swingarm, which is supported by a single shock and spring seen below the rear section. A chain-driven sprocket is seen on the left side, while a brake disk is seen on the right side. The exhaust muffler can be also seen beneath the left rear fender.

The Blazer normally spawns in two-tone colors, where the primary one is applied on the front section, part of the side fairings and on the rear fenders, while the secondary one is applied on the front fenders, upper front section, sides and the surrounding of the main seat. The vehicle uses concave plain rims with cone-shaped centers and bolt details on the outer surroundings, wrapped in high-profile rugged tires with knobby circular treads.

Given the quadbike characteristics, the Blazer is a fast and responsive vehicle with quick acceleration and good top speed, along with impressive braking and good off-road capabilities. Its size often means it can squeeze through narrow roads or even alleyways, and like most motorcycles, it has leaning capabilities to ensure stability on jumps. Its handling, however, appears to suffer from minor oversteer and has a rather sensitive response, although it is not that severe.

The Blazer appears to be powered by a parallel-twin engine, coupled to a 5-speed gearbox and powering all wheels, with a power distribution of 20% to the front and 80% to the rear. It shares the same high-revving engine sound from the Sanchez.

Artwork of Trevor on a Blazer.

A Blazer being used by Franklin.

Trevor escaping from the LSPD on a Blazer.

Trevor fleeing from the LSSD on a Blazer.

Trevor jumping off a ramp on a Blazer.

Trevor descending from Mount Chiliad on a Blazer. 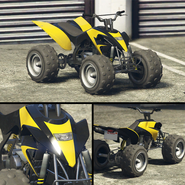 The Blazer on the updated Rockstar Games Social Club.

The Blazer in the cinematic preview on GTA V Rockstar Games Social Club.

The Blazer in the cinematic preview on GTA Online Rockstar Games Social Club.