"Have a puff 'n a pint"
"Making your mouth feel lucky"

In GTA IV and GTA: Chinatown Wars, it is sold in the Steinway Beer Garden and Lucky Winkles, while advertisements can be found around the state. There is also a Blarneys Stout's Distribution Center in Port Tudor (just left of the port south entry). In GTA V, Blarneys is sold in Rob's Liquor, 24/7 and LTD stores.

In GTA Online, a Blarneys Beer Hat was supposed to be obtainable through special crates as part of the Independence Day Special, however, because of a glitch, it and a second hat (J's Lager) became unavailable for pick-up through normal means. Later, the Blarney Beer Hat could be unlocked for players who logged in during the weekend of the GTA Online Bonuses (March 2020 Part 3) event.

In Grand Theft Auto V, Blarneys owns a museum in Vinewood on Vinewood Boulevard called "Blarneys World of Awesome". The building is based on the Guinness World of Records museum in Hollywood[1].

In The Cayo Perico Heist, the sponsor ad for Still Slipping Los Santos states that Blarneys Stout is available in the Mirror Park Tavern.

The beverage is most likely a parody of Guinness due to its Irish theme. On billboards, a glass of it is pictured being grasped by a cigarette-holding puffin, with the slogan "Have a puff'n a pint", parodying Guinness' use of a toucan and Irish slang ("pint" referring to a filled glass of beer and "puff" to smoking a cigarette). The year of the beverage's founding (1758) is also very close to that of Guinness, which was founded in 1759.

Blarneys Stout on the Harmony postcard. 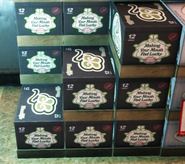 The slogan seen on beer boxes.

A bottle of Blarneys Stout beer in GTA IV. 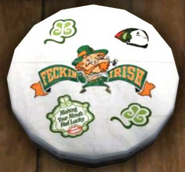 Rear view of the museum.
Add a photo to this gallery

Retrieved from "https://gta.fandom.com/wiki/Blarneys_Stout?oldid=1317655"
Community content is available under CC-BY-SA unless otherwise noted.