Area 69 shortly before being invaded by Carl Johnson

Break into Area 69 and steal the Jetpack

Wasted
Busted
Not entering the compound by 05:30
Abandoning the Area 69 zone before stealing Jetpack.

Black Project is a mission in Grand Theft Auto: San Andreas given to protagonist Carl Johnson by The Truth from Verdant Meadows, Bone County, San Andreas. It can be only triggered between 20:00 and 06:00.

Carl arrives at the airfield and is welcomed by The Truth, exercising on the top of an aircraft wreck. Truth then berates Carl for having agreed to work for a government agent. He then tells Carl about a secret military research area, where he believes a "black project" is being developed. Truth drops Carl off at the boundaries of the base before leaving the area.

Carl must sneak into the underground area, by using the control tower to open the blast doors and get inside. However, the area is well protected with several soldiers patrolling the area, as well as spotlights. If Carl is spotted by a spotlight, the blast doors will be isolated from the main system, which forces Carl to use a vent to get inside.

Once inside, the alarm goes off, and Carl is forced to kill every soldier on his way to the project. Upon arriving in a lab, a scientist gives Carl his keycard, which he uses to gain access to the launch bay, where the project, which turns out to be a Jetpack, is lying at the bottom. Carl steals it and flies towards Arco del Oeste, where Truth is waiting in his van. Truth takes it, then leaves the area, while Carl complains about Truth refusing to drive him back to the airfield.

There is no money reward for this mission. A few minutes after completing the mission, The Truth will call Carl, which unlocks the mission Green Goo. The Desert Eagle is now available to buy from the Ammu-Nation ($1,200).

Truth: Carl. It's me. The Truth. We got a date with destiny, man. In about five minutes.

CJ: Where you at?

Truth: At the old airplane graveyard you've been hanging around. 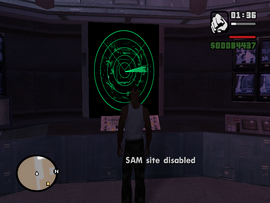 Carl disabling the SAM site in the control room.