Not much is known about the company, as there are no weapons seen in-game to be made by them, but their name tagline: "Handgun Specialists" suggests that they manufacture, repair, or sell handguns.

So far, the company can only be seen on vehicle liveries in Grand Theft Auto Online. The liveries are usually for more heavy and off-road vehicles, the Freecrawler and Caracara 4x4, which might suggest that the company is American, since its branded liveries only appear on American-manufactured vehicles.

However, there is a livery for the RM-10 Bombushka called "Black Eagle", but it is likely not connected to the firearms brand because it lacks any Black Eagle branding and there is also a livery called "Gold Eagle", which is just a colour variant of the Black Eagle livery.

Black Eagle stickers can be seen on the tool racks in the basement of player-owned Arcades as part of The Diamond Casino Heist update. 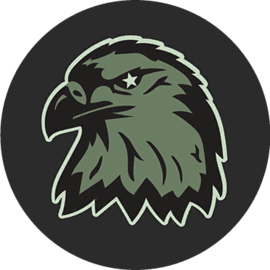 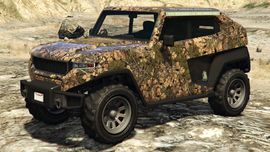 A Freecrawler with a Black Eagle Hunter livery. 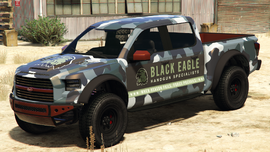 A Caracara 4x4 with a Black Eagle livery.
Add a photo to this gallery

Retrieved from "https://gta.fandom.com/wiki/Black_Eagle?oldid=1237630"
Community content is available under CC-BY-SA unless otherwise noted.