In GTA V, Blêuter'd bottles can be found inside 24/7, Limited Service and Rob's Liquor stores.

In GTA Online, as of the Further Adventures in Finance and Felony update, the player can smuggle special crates containing Blêuter'd champagne and Redwood Cigarettes. The nightclub and casino bars offer Blêuter'd champange for sale to the player in a Silver, Gold and Diamond variant. The player can add a bottle of Blêuter'd Gold to their inventory, for use as a snack, by requesting it for free through the penthouse phone services. Consuming the champagne will show the same action as if it were consumed at a bar.

Various luxury aircraft feature Blêuter'd bottles on small stands, in which passengers can drink champagne from these bottles.

Bottles of Blêuter'd in GTA V.

A Blêuter'd bottle in a Gay Tony's artwork.

A Blêuter'd bottle in Joni's artwork.

A Blêuter'd bottle inside a Luxor Deluxe. Other similar luxury aircraft feature these bottles.

Blêuter'd that has been smuggled. 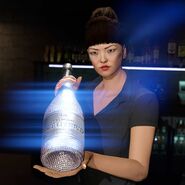 A bottle of Blêuter'd Champagne Diamond newly purchased at a nightclub.