"Be Everywhere. And Nowhere"

"The original handheld weapon of mass procrastination."
―Description at Bawsaq.com.

bitterSweet (BAWSAQ: BTR) is a phone company advertised heavily in Grand Theft Auto IV. The player can buy stocks from then in the Bawsaq.com website in GTA V.

The bitterSweet spoofs the Blackberry, and is advertised as highly addictive, and highly annoying. The motto for bitterSweet is Be Everywhere. And Nowhere.

The advertising for the bitterSweet focuses mainly on user testimonials, and prides itself on being "always connected, perpetually disconnected". Commercials focus mainly on the annoyances of the BlackBerry phone, such as loud alerts and a constant blinking red light for unimportant emails, the device taking most of the owners' attention (The "Blackberry Disease") and dismissing family functions. Though the BitterSweet is constantly mentioned in-game, it is not obtainable. 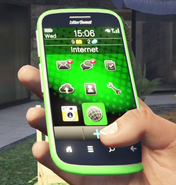 Franklin's BitterSweet as seen on the Social Club page.

Retrieved from "https://gta.fandom.com/wiki/BitterSweet?oldid=1164740"
Community content is available under CC-BY-SA unless otherwise noted.