GTA Wiki
Register
Don't have an account?
Sign In
Advertisement
in: Businesses, Manhunt, Businesses in GTA III,
and 15 more
English

Logo in the HD Universe.

"Make that bitch SHUT UP"

The Manhunt Wiki has an article on:
Bitch'n' Dog Food
“Make that Bitch SHUT UP”
— The company's slogan.

Bitch 'n' Dog Food is a dog food producing company in the Grand Theft Auto and Manhunt series that appears in both 3D Universe and HD Universe games.

By 2001 (when the events of Grand Theft Auto III take place), the company has a factory in Trenton, Portland, located to the right of Joey's Garage, although in 1998, the factory's premises was Don Kiddick's Sausage Factory. The factory in Trenton is owned by Marty Chonks, while the Love Media website claims that Donald Love owns the company. The official website for Grand Theft Auto III claims the company use "tasty bone meal, chicken carcasses, the scrapings off the abattoir floor and lots of other nutritional goodies".

During the events of Grand Theft Auto III, the owner of the factory, Marty Chonks, is shown to be in a financial crisis, presumably due to the ban on dogs being placed. In an attempt to make money, Marty orders Claude to do him jobs through the payphone outside the factory. He orders Claude to pick up his corrupted bank manager, who has taken an extra cut of his profits. After being picked up by Claude, he is killed by Marty, who uses his corpse to produce dog food.

After having disposed off the car used to pick up the banker to remove evidence, Marty tells Claude he hired two burglars to break into his house to gain the insurance money, but are now blackmailing him for more money. Claude delivers the crooks to the factory, where they are killed by Marty in the same way as the banker, with the Sentinel used to deliver them being resprayed to remove further evidence of Marty's murdering. However, Marty's finance is still at an all-time-low, with his wife having spent most of the money for her personal usage. Claude uses an Esparanto to bring her to the factory, where she is killed by Marty, with the car being disposed into the water. However, some time after, a loan shark who had a crush on Mrs. Chonks, is now looking for a payment from Marty. Marty orders Claude to drive an armed Carlos to the factory, where Marty meets him outside the factory. Carlos is aware of Marty's plan to murder him, and he shoots Marty dead, claiming that he will take over the factory.

Bitch'n' Dog Food is later mentioned on the radio in Grand Theft Auto IV and food cans can be found in several houses during gameplay. The company claims its products are more nutritious than Wigwam Burgers and advises parents to shell out the extra so that their offspring will reach the age of 30. Products from the company can also be found in the Raven Slaughterhouse in Grand Theft Auto V, with an updated logo.

In the I'm Not a Hipster Update for Grand Theft Auto Online, the Bitch'n' Dog Food logo was on a T-Shirt that was obtainable in a special crate drop. This was also available in the same manner during the Festive Surprise update during Christmas of 2014. 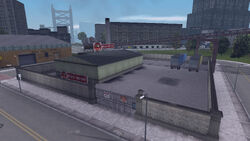 The entrance to the Bitch’n’ Dog Food Factory in GTA III.

A "Make That Bitch SHUT UP" advertising for the dog food, GTA III. 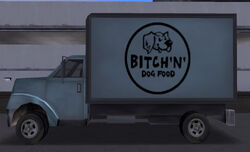 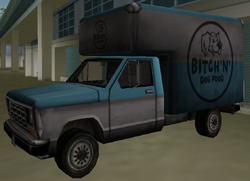 A Benson with the dog food logo in GTA Vice City. 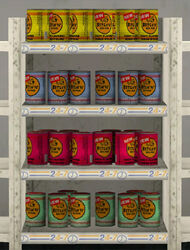 Cans of Bitch'n' Dog Food at a 24-7 outlet in GTA San Andreas. All the cans are labeled as having "Pussy Flavored Horse Eyelids" in the dog food.

Cans of Bitch'n' Dog Food at a Fidl outlet in GTA Vice City Stories. All the cans are labeled as having "Pussy Flavored Horse Eyelids" in the dog food. 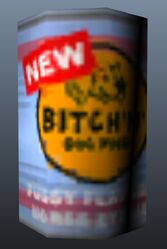 Can of Bitch'n' Dog Food in Grand Theft Auto IV. 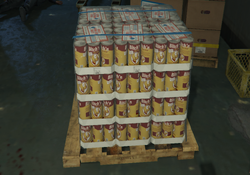 A pallet of Bitch'n' Dog Food cans in GTA V.