Standard White - 100%
“A powerful pickup for the accommodating the true San Andreas life. Bottom line? Enough torque to tear up offroad inclines and tear down hillside mansions.”
— Career Builder description.
“The Bison used to be the pick-up truck of choice for farmers and construction workers until Bravado realized they could double the price and market it to emasculated urban types desperate to feel like men again.”
— Southern San Andreas Super Autos description.

The truck's front end appears to have design influences taken from the styling of the fourth generation Dodge Ram, and minor influences from the second generation Toyota Tundra. The rear is based on the twelfth generation Ford F-150. The cab design is slightly reminiscent of that of the 1999 Chevrolet Silverado.

The truck's design appears to be somewhat sports-influenced. The front features a bold layout, dominated by a large, protruding chrome-trimmed grille, which features three inset horizontal chrome strips. The manufacturer emblem is placed centrally on the area that connects the two lowest strips. Adjacent to the grille are the headlamp units which are less tall and split horizontally into two sections, with the horizontal split occurring at the same height where the manufacturer logo is mounted. Below the grille is a protruding front bumper. The front bumper features two horizontal ducts, with the lower one more narrow than the duct above. The edges form a hexagon shape when combined with the edges of the grille. The base of the front bumper is given a more sporty appearance by a lip that spans the bottom edge. License plates are mounted centrally in front of the two ducts. Circular fog lamps appear beside the ducts and beneath the headlamp units. Above the grille, bounded by lines which run from the corners of the headlamp and grille to the base of the A-pillar and windscreen respectively, there is a large elevated area of the hood.

At the sides, similar subtle sports features can be seen; the wheelbase has flared skirting. The main body is however quite plain, lacking any extra formations. The main body line runs from the top-outer corner of the headlamps to a rearmost point of the sides above the taillight units. The greenhouse is quite curved, illustrating a more modern appearance. The mirrors are mounted at the base of the A-pillars. The truck has medium profile tires that enwrap six-spoke wheels. Behind the rear arches more skirting can be seen.

At the rear, a chrome bumper is placed above the skirting at the base of the rear face. Adjacent and above the rear bumper, at the corner of the body are the tail light units. The units are chrome-trimmed and split into two sections horizontally, the top section being rectangular and the bottom, an irregular trapezium. The taillight units appear completely red. Ovular exhaust tips can be seen underneath the rear of the truck. Under the rear bumper there is a tow hook. The Bison is one of the pick-up trucks in the game that are capable of towing a trailer. 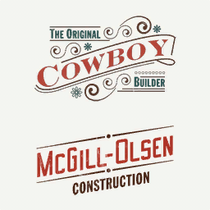 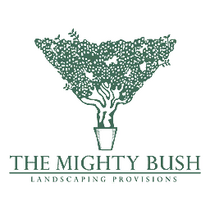 Thanks to its modeled V8, with, according to TV advertisements, 6000 horsepower, the Bison is capable of reaching a good top speed, but it leaves much to be desired in terms of acceleration. Much like the Dodge Ram, it handles well while off-roading thanks to its 4WD (20% front, 80% rear) drivetrain, however, it lacks stability, most notable when doing the off-road truck racing. The Bison seems to have a lot of power (6000 horse power, as advertised on TV), as it pulls down Martin Madrazo's house just like a Tractor, and it has excellent torque and can climb steep hills with ease.

A wider front and side view.

A rear view of the truck with a boat trailer attached.

A front view of the truck, with load bed passengers.

Interior of the cab. 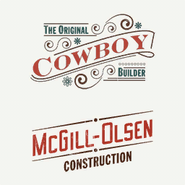 Unique Bison that spawns in the mission Complications.

The Bison's winch in the back during the mission Marriage Counseling.

The Bison pulling Martin Madrazo's house down in the mission Marriage Counseling. 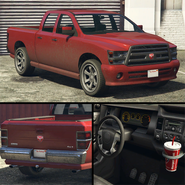 The Bison on the updated Rockstar Games Social Club.

The Bison in the cinematic preview on GTA V Rockstar Games Social Club.

The Bison in the cinematic preview on GTA Online Rockstar Games Social Club.

The McGill-Olsen Bison on the updated Rockstar Games Social Club. 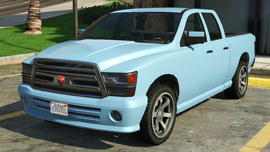 An Epsilon Program variant of the Bison. (Rear quarter view)

The Bison is part of vehiclemodelset "CARS_CONSTRUCTION" which commonly appears driving in and out of construction sites or parked around them. This model set covers the standard civilian variant and The Mighty Bush variant, excluding the McGill-Olsen Bison.