Signage for the beer is found in the Steinway Beer Garden and at the Superstar Café in Grand Theft Auto IV, although it is not seen and cannot be consumed by the player.

Birra Puttana could be based on the Italian beer brand Birra Moretti. 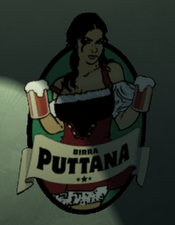 Birra Puttana logo on a wall inside Superstar Café. 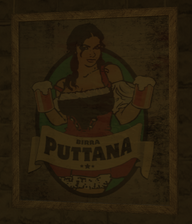 A Birra Puttana logo on the walls of Steinway Beer Garden.
Add a photo to this gallery

Retrieved from "https://gta.fandom.com/wiki/Birra_Puttana?oldid=1163247"
Community content is available under CC-BY-SA unless otherwise noted.