GTA Wiki
Register
Don't have an account?
Sign In
Advertisement
in: LCPDDB, Characters, Characters in GTA IV,
and 9 more
English

The Lost and Damned
The Ballad of Gay Tony

Billy Grey was born in 1971 in Acter, Alderney. He was introduced to violence and racism at a young age, by watching news coverage of the Vietnam War and Chinese Cultural Revolution when he was under 10 years old (as he tells a Triad capo during Chinese Takeout). Around 1984, he was friends with Michael Klebitz when Michael was 15 and Billy was 13. During their friendship, Billy was introduced to his younger brother Johnny Klebitz, Johnny being only 10 at the time. According to Michael, Billy "thought he was Jesus on an acid trip" and quickly became a bad influence on Johnny. Michael, in contrast, became a soldier in Iraq and an upstanding citizen, criticizing Billy's and Johnny's criminal biker lifestyle. In 1986, Billy was arrested for stealing a bike when he was 15, which Johnny would soon imitate in 1991. Billy committed many other crimes and served up to two years in juvenile hall before he and Johnny both joined The Lost MC. He was arrested for murder in 1989 when he was 18, possibly alongside Brian Jeremy who was arrested for the same crime in the same year (regardless, Brian would eventually be his most loyal follower in The Lost).

Billy worked his way up from a prospect to president of the chapter. Billy is shown to be a sadistic and violent leader and as president, he enacted the worst acts of violence to The Lost's ongoing rivals since 1982, The Angels of Death. During his presidency, he was also responsible for several incidents, including road accidents that paralyzed fellow Lost MC member Angus Martin and resulted in a woman having to have a leg amputated and the nephew of Angels of Death member Joseph Johnson ending up in a coma. His drug problem severely worsened; he began using heroin. The mission This Shit's Cursed reveals that Billy also used to take steroids.

At another point in time, Billy slept with Johnny's girlfriend Ashley Butler. Johnny became understandably jealous but never openly criticized Billy for it, possibly hinting that his relationship with Ashley was already weak due to her drug addiction, with the affair being the final straw.

In early 2008, Billy was arrested for drug distribution and placed in a court-ordered rehab. Johnny became acting president in his absence, giving Billy's motorcycle to the Angels of Death as a peace offering and using the money to pay Billy's legal fees. Months later, he was released (in the first mission of the game, Clean and Serene) and reclaimed his place as Chapter President, also continuing his drug habits. Billy, just as he returned from jail, ordered Johnny to retrieve his bike.

During the raid, Billy found a large shipment of heroin belonging to the Angels of Death. Ignoring Johnny's claim that stealing it would start a war, Billy takes the heroin. He later sends Johnny to Elizabeta Torres to sell the Heroin to a third party; however, despite having Niko Bellic and Playboy X as backup, the deal turned out to be an LCPD sting.

Betraying Johnny and Jim/Return to Jail

Billy makes a deal with a Triad leader — he would lead Johnny and Jim Fitzgerald to the Triad building, and would let the Triads kill them and take the heroin for themselves. However, when the planned ambush took place, Johnny and Jim lost the heroin but escaped the ambush. Billy tried to escape but crashed his bike and was arrested by the police. This left Johnny as chapter president of The Lost. Billy's arrest caused a brief civil war between The Lost and a breakaway faction led by Brian Jeremy, which ended when Johnny killed Brian.

“What? You waiting for a speech or something? Come on!”
— Billy's last words.

Billy contacted Ray Boccino and told him that Johnny and Jim would betray him. Agent Jones, an FIB agent, contacted Johnny and told him Billy planned to testify against him in court. In the game's final mission, Congressman Thomas Stubbs told Johnny that Billy planned to pin a drug operation on Johnny and Angus Martin in exchange for a place in witness protection. Johnny, along with Terry Thorpe and Clay Simons, attacks the Alderney State Correctional Facility. After fighting through the facility, Johnny confronts Billy. After Billy taunts Johnny about killing him, Johnny is hesitant to shoot Billy. Billy lunges at Johnny with a knife, before Johnny finally shoots Billy in the face, killing him.

NOTES
- Head of the Alderney Chapter of the Lost Outlaw Motorcycle Gang.


- Recently convicted of a drug related felony and sentenced to rehabilitation.
- Johnny Klebitz is believed to have taken control of the Chapter while Grey was incarcerated.


- Some of the Lost's Alderney chapter worst confrontations to date with the Angels of Death OMG occurred under his command.

Billy Grey can be accurately described as a sociopath. He has reckless and violent tendencies and often acts without thinking, such as when he resumed the war with the Angels of Death after a peaceful compromise beforehand and smashed a mechanic in the face with a mallet despite the mechanic telling him where his bike was. He also is very treacherous, as he willingly set his "brothers" into a deathtrap. Billy also planned to betray The Lost further by ratting them out to the government, in order to join the Witness Protection program. Michael Klebitz warns Johnny to be careful of Billy in one of his emails, as he claims that Billy "wouldn't piss on [Johnny] if he was on fire".

Billy is openly racist, as shown when he uses various ethnic slurs towards a member of the Chinese Triads.

Billy's drug addiction made him look much older than he was. He had a thick greying beard, short greying hair with a slightly receding hairline, and a tattoo of a skull between his eyebrows. He wore a standard Lost biker jacket with a "President" patch on it.

Billy's vest has relatively few patches. Here they are, and what they mean:

During his time in the Lost, Billy rode a customized black Revenant, which he claims was built by Johnny Klebitz and Angus Martin. Before the events of the game, Johnny offered the bike to the Angels of Death as a peace offering in an attempt to defuse the war between the two clubs and also to ease the Lost's financial troubles. When trying to escape from the ambushed drug deal that Billy himself had orchestrated, he crashed his bike, resulting in his arrest by the police.

Billy smashing Pretty Boy's face with a mallet in "Clean and Serene".

Billy shoots the Angels of Death lieutenant in the back.

Badly injured and getting arrested in "This Shit's Cursed".

Billy in the prison.

Billy after getting executed by Johnny.

A mugshot of Billy as seen on a Weazel News report. 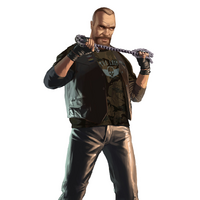 Another concept artwork of Billy Grey.