The house's location in Ballas territory is one of the many clues in the opening chapters of Grand Theft Auto: San Andreas that points to Big Smoke's betrayal later in the game. The first was his new car. Another one was how Carl Johnson always questioned Smoke, asking why he moved into Ballas turf, with Smoke claiming he wanted to move away from the hood or that he was left some money by his aunt. Both the house and the car hint that Smoke has more cash than he is seemingly earning. Other clues about his future betrayal include C.R.A.S.H. officers frequently visiting his house, the fact that Smoke refused to open fire on attacking Ballas in the mission Drive-Thru, and Smoke's newly sparked rivalries with foreign gangs. All of these clues pointed towards Smoke's betrayal of Carl, Sweet and the GSF.

By End of the Line, Big Smoke has moved out of the house and into a crack palace in East Los Santos. 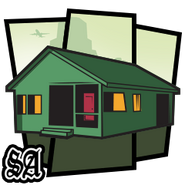 Icon for the PS3 trophy "The American Dream", designed after the house.

The house's location.
Add a photo to this gallery

Retrieved from "https://gta.fandom.com/wiki/Big_Smoke%27s_House?oldid=1198048"
Community content is available under CC-BY-SA unless otherwise noted.