The Crack Palace is made up of four floors, the "Security Area", the "Drug Lab", the "Ballas Lounge" and Big Smoke's suite. The building is used as a crack palace by allies in the form of security from the Ballas, Los Santos Vagos, San Fierro Rifa, corrupt LSPD officers and the Russian Mafia. It is a front to sell drugs around the city, mostly crack cocaine, hence the name. Even though the building is blown up during End of the Line, it is still accessible after the mission, undamaged. A statue that shows Big Smoke's original beta character design can be found inside the palace. In Big Smoke's suite, there is a Sprunk vending machine and 3 "Go Go Space Monkey" arcade machines.

Spoiler Warning: Plot details, ending details, or both are in the text which follows.
While their enemies, the Grove Street Families, are disbanded, Ganton is owned by the Ballas, Carl is taken away by Frank Tenpenny and Eddie Pulaski, Sweet is imprisoned, and the Palace rises to power. The power of Big Smoke increases with the drug trade from the Crack Palace to all over Los Santos. Big Smoke moves into the building sometime after Carl Johnson is forced to leave Los Santos. The other front of Big Smoke's drug empire, second to the Crack Palace, was the crack factory in Doherty, San Fierro, destroyed by Carl Johnson in the mission Yay Ka-Boom-Boom. In the mission End of the Line, Carl breaks into the building with a SWAT Tank and kills Big Smoke, before Frank Tenpenny destroys the building. Carl escapes, and, after a chase across Los Santos, witnesses the death of Tenpenny. 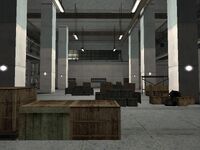 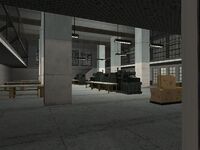 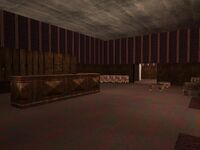 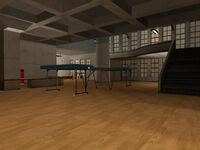 The statue of the beta Big Smoke inside the crack palace.

Hole on the first floor 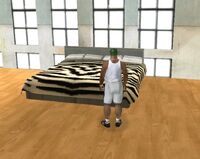 Retrieved from "https://gta.fandom.com/wiki/Big_Smoke%27s_Crack_Palace?oldid=1122730"
Community content is available under CC-BY-SA unless otherwise noted.