GTA Wiki
Register
Don't have an account?
Sign In
Advertisement
in: Articles with section stubs, Pages with unclear information, Vehicles,
and 11 more
English

Standard White - 100%
“A compact, lightweight, off-road recreational vehicle, BF likes to pitch the Bifta as the world's original dune buggy (i.e. They forgot to patent the design so the market's now flooded with carbon copies from other manufacturers.)”

The Bifta closely resembles a Meyers Manx (a kit car made from a Volkswagen Beetle), seen in the overall design and circular lamps. The vehicle is also very similar to the 3D Universe iteration of the BF Injection, (namely the Grand Theft Auto: San Andreas iteration, due to the more angular design).

The Bifta is particularly distinctive by its compact, rounded design, where the front features a small defense frame with mounted "MK1" fog lamps and license plate. The upper area is relatively simple and has two circular headlamps with a chrome finish. On the sides, large curved fenders cover the wheels and are connected to each other by a curved section on the middle, with additional frames on the skirting area. A roll cage protects the cabin area, with two parallel frames on the roof and two sloped ones over the engine bay. The rear of the car is very exposed and features dual LED tail lamps on either side and a license plate on the centre. Large chrome exhaust tubes can be seen coming from the engine, which merge into one single tube with a carbon-fibre muffler facing to the passenger side. The underside area is seemingly identical to the Dune Buggy, but has a single steel floor panel. The interior of the car also reuses the main components from the Dune Buggy, being the set of pedals, the steering wheel with the exposed column, the radio set, the gear stick and the main seats. The inner sides of the car are finished in carbon fibre.

The primary colour of the car is applied on the main body shell, while the secondary colour is applied on the tube chassis/roll cage and in the form of a central wide stripe on the front and the rear. It uses a set of wheels with rims similar to the "Revolver" muscle rims also available in Los Santos Customs, wrapped in high-profile tyres with standard-treaded pattern.

The Bifta is a solid vehicle; having a fast and stable top speed and acceleration, and due to the fact that it is an off-road vehicle with its dune buggy-like design, it performs acceptably well off the streets and on off-road terrains. However, the Bifta can be problematic when navigating through bumpy terrain at high speeds, which can result either in a spinout, or a rollover. It also suffers from having a slow braking speed. Due to this, it takes a while to come to a full stop, although this can be remedied by upgrades available at Los Santos Customs. In terms of handling, the Bifta navigates terribly, as it has a short wheelbase which makes it prone to spinning out even at medium speeds.

The Bifta also lacks major deformation, making the vehicle very rigid for many crashes - with only engine damage being a possible threat to the use of the vehicle. Wheel cambering is common, especially around the front end, causing the wheels to camber negatively into the wheel arches, eventually bursting the tires, or completely disabling the vehicle from turning.

Overall, the Bifta is a solid off-road performance vehicle for racing, and escaping the police (although the open bodywork does make any player(s) inside of it more vulnerable to gunfire)[1]

The engine model appears to a single-cam flat-4 engine with two carburetors and a large air cooling system, which is also shared with the Dune Buggy and Injection. The vehicle shares its engine sound with the Monroe, being particularly high revving and high pitched.

A Bifta with a solid roof, an extra purchasable from Los Santos Customs. 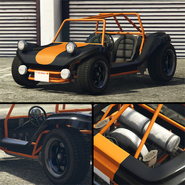 The Bifta on the updated Rockstar Games Social Club.

The Bifta in the cinematic preview on GTA V Rockstar Games Social Club.

The Bifta in the cinematic preview on GTA Online Rockstar Games Social Club.