Before the release of Grand Theft Auto Advance, there were features that were removed from the final product.

At the beginning of its development, GTA Advance was meant to be a portable version of Grand Theft Auto III for Game Boy Advance, nicknamed "GTA III Advance". This possibly means that the protagonist would be Claude and the story would be the same as that of GTA III missions, characters and vehicles.

In May of 2001, Destination Software obtained the license to develop the Game Boy Advance version of GTA III, in conjunction with other games of Rockstar Games. In November of that year, the Digital Worldwide company confirmed that it would be in charge of the publication and distribution of the game, announcing that the game would be released at the end of 2002, but its launching was delayed several times.

At the end of 2002, Destination Software lost the license and the development was given to Crawfish Interactive. During the development, the game took a drastic change and stopped being only a portable version of GTA III.

According to an formely developer of the game, Dave Murphy, explained that this version takes place in a few months before the events of GTA III. The characters was a mix of GTA III's characters and some new ones based on their colleagues of the developer.

During the development, the company closed by economic problems and Rockstar granted the license to Digital Eclipse, changing the game's name to Grand Theft Auto Advance.

"Final Negotiations", "Company Car", "The Big Leagues" and "Driving Mr. Mawson". Also, a mention of a character called Jonnie S.
Add a photo to this gallery

If you open the game's ROM (.gba file) with the notepad or a hex editor, you will find some lines of code with a list of vehicles that were supposed to be part of an import/export sidemission. Interesting fact, some of these vehicles are from GTA III.

A multiplayer was intended to be in GTA Advance, with four different modes: 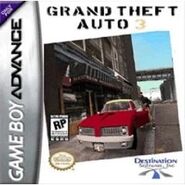 The barrel in the HUD 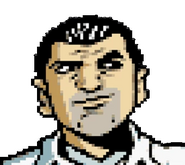 A billboard of K-JAH in the final version GTA Advance, the last bit of evidence of the stations existence carried over from the beta.
Add a photo to this gallery

Retrieved from "https://gta.fandom.com/wiki/Beta_Releases_in_GTA_Advance?oldid=1227131"
Community content is available under CC-BY-SA unless otherwise noted.