"Turns out you can have it all: power with class, innovation with pedigree, looks with personality. The Bestia GTS has all the finesse and ferocity of a supercar, but its unique rear styling allows for two more seats in the back, with more than enough legroom for a couple of amputees or the children you never had. It's a visionary fusion no one ever saw coming, and for good reason."
―Legendary Motorsport description.

The Grotti Bestia GTS is a two-door shooting-brake featured in Grand Theft Auto Online as part of the Further Adventures in Finance and Felony update.

The two-door car appears to take heavy influence from the Ferrari FF and Ferrari GTC4Lusso, seen heavily in the front grille design, headlamp shape and overall body shape. The car appears with a black frontal trim centered between the two primary-colored front bumper panels which surround the large 3-element grille, containing chrome dividers. The hood can be seen with a bulge in the center as the two front arches curve up towards the A pillar of the vehicle. The rear of the vehicle features a B pillar also taken from the FF, where it makes the car a grand-tourer with a hatched-back design. The tail lamps take influence from the Toyota 86. The roof features a carbon finish which leads up to the front pillars of the vehicle with the roof-line itself being painted in the primary color. A hatched window is found on the rear.

The car's performance is similar to that of the Carbonizzare, having above average acceleration and a very similar top speed. The car holds an all wheel drive layout with a front engine. Its handling is also excellent, thanks to a nippy steering rack which has a large radius. The car engine sound revs high, which is also taken from the Carbonizzare's. The engine model appears to be a twin-cam 4 cylinder engine, which sounds more like a high revving engine. The car has twin exit, twin exhausts popping through a carbon-fibre exhaust housing around the bumper, with chrome circular tips.

The red Bestia GTS as seen in the Further Adventures in Finance and Felony trailer.

The Bestia GTS on the Rockstar Games Social Club. 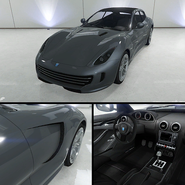 The Bestia GTS on Legendary Motorsport.

The Bestia GTS on the updated Rockstar Games Social Club.

The Bestia GTS in a cinematic preview on Rockstar Games Social Club.

3 heavily modified variants of the Bestia GTS may appear in Vehicle Cargo source missions. Each variant has a unique license plate number, colour combination and different set of bodywork modifications.

Retrieved from "https://gta.fandom.com/wiki/Bestia_GTS?oldid=1212399"
Community content is available under CC-BY-SA unless otherwise noted.