Timothy J. Alex
“Oh, my God! You think it was me... that's why you're here. You've come to kill me! Well screw you, Niko Bellic and fatty Roman! It wasn't me. It wasn't! I wouldn't do that!”
— Bernie Crane getting angry at Niko Bellic for thinking he was the traitor, in Weekend at Florian's.

Florian Cravic (Serbian: Флоријан Кравић, Florijan Kravić), also known as Bernie Crane, is a character in the Grand Theft Auto series who appears as a key main character in Grand Theft Auto IV and an unseen character whose voice can be heard in The Lost and Damned. He was tracked down by Niko Bellic with help from Ray Boccino. He is one of three survivors from Niko's fifteen man unit, the others being Niko himself, and Darko Brevic.

Florian was born in 1978, in the same village where both Niko Bellic and Roman Bellic grew up. During his adolescence, he fought in the Yugoslav Wars with Niko Bellic, was a childhood friend of Roman Bellic, and unknown to anybody but himself, was deeply in the closet as a homosexual despite telling people he wanted to be a wrestler and a shepherd. He once worked in an abattoir; which he is ashamed of. Thus he behaved much less feminine than he did in later years, including having a more masculine voice (which is heard in Weekend at Florian's, when he becomes very angry). In his last days of the war as a teenager, he joined Niko, Darko Brevic, and twelve other soldiers on a mission into enemy territory. Darko had secretly sold information to their enemies, and all twelve were killed with the exception of Niko, Darko and Florian.

As early as 2001, Florian moved to Liberty City, where he changed his name to "Bernie Crane" (shunning "Florian Cravic" as if it were a split personality) and felt comfortable being an openly gay man. At a foam party at the famous gay-club Hercules (opened in 1998 by "Gay" Tony Prince), he met Deputy Mayor Bryce Dawkins, who he started dating afterwards. In 2003 and 2004, he was arrested for soliciting sex and holding ecstasy. He may have been dating Dawkins at this time, as Dawkins ordered the LCPD not to harass Bernie in any way.

In 2008, Niko Bellic travelled to the United States to track down Cravic. After working for many crime syndicates, mobster Ray Boccino pointed Bellic in the direction of Talbot Daniels, an associate of Cravic's. With Roman's help, Niko forced Talbot to direct him to Cravic's residence. When they arrived, Niko and Roman broke into his apartment and held Cravic at gunpoint. Cravic insisted that he was innocent, initially believing Niko had sold the unit out. Niko is convinced by Cravic's innocence, and vows to track down Darko Brevic.

Cravic later asks Niko to help him, as he is constantly being harassed about his sexuality by everyone from a homophobe to Bryce's many blackmailers (Dimitri Rascalov, a major Russian mobster and coincidentally an archenemy of Niko's, and to a lesser extent Thomas Stubbs III, another politician who successfully bugged Dawkins' Infernus without them knowing). Niko eliminates all of these problems, and Bernie eventually gives him the Infernus, both of them unbeknownst that it was bugged. Cravic appears for the final time at Roman's wedding (he appears at the wedding regardless of which ending the player chooses), throwing confetti over Roman and Mallorie. He later screams when either Kate McReary or Roman Bellic are killed during the shootout (depending on the ending the player chooses). In the "Deal" ending, he comforts Mallorie when she sobs over Roman's dead body.

- Order from Mayor's office not to arrest or harass in any way.

"I think just because I'm fabulous." 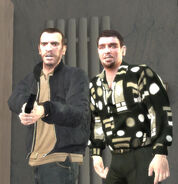 Bernie holding a picnic basket in the mission "Buoys Ahoy". 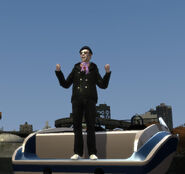 Bernie on a Tropic at the end of Buoys Ahoy mission.

Bernie in the mission Mr and Mrs Bellic.