The Benson in GTA San Andreas has the incorrect engine sound, as it makes a heavy truck sound, instead of a light/medium truck sound, which the Yankee incorrectly has too.

Manufactured by Vapid in Grand Theft Auto IV, the Benson is much larger. The design of the Benson now takes a much longer appearance and is also much lower down, meaning it is also less likely to roll over in fast cornering. It has a bottler truck body-style, though certain versions (such as the mail truck) don't utilize its initial function. The Benson is heavily based on the International 4700 delivery truck chassis. The truck features side shutters, a rear trolley and loading bay (albeit non-functional). The truck also comes with a push bar on the front reused from the Enforcer.

The truck is split into two colors; the cabin is painted in the primary color, while the rear unit is painted in a secondary color. The vehicle only has two spawn colors, however.

The Benson returns to Grand Theft Auto V and Grand Theft Auto Online, with an almost identical design as GTA IV. The truck is now primarily used as a moving truck as opposed to a bottler truck, and as such, lacks the rear trolley and loading bay, and in their place, a new ramp door is found, hinged from the bottom. The side handles have been moved up to compensate for the larger door, and new marker lights have been added. The front pushbar has also been replaced with a much larger, heavy duty pushbar reused from the Hauler, and the front bumper itself is plastic as opposed to chrome. The grille has also been changed, and no longer features 3D horizontal parts. The passenger-side step marker light has also been removed. The side shutters also lack the original depth they did in GTA IV, and are now flat.

An interior has been added to the truck. Cars and motorcycles can be transported in the back of the Benson by lowering the rear door (by either shooting it several times, or ramming it with a nearby obstacle or vehicle), however vehicles stored in the truck tend to become stuck in the vehicle and often explode, or slide out, unexpectedly.

The vehicle is now painted in a single color as opposed to its previous iteration of two colors. The vehicle also has 6 brand-new liveries.

The Benson is fitted with a CB radio, and occasional trucker chatter can be heard regardless of whether the main radio is turned on or off. The chatter will only play if playing as Trevor and in Blaine County.

Being the smallest cube van between GTA Vice City and GTA Vice City Stories, the Benson has a decent top speed and quick acceleration, and has room for two people including the driver. However, it is prone to flipping over easily on rough terrain and when turning around corners at high speeds. It has no special features. The Benson is quite vulnerable to bullet damage in GTA San Andreas although it can withstand a lot of damage before catching fire.

Players can even do doughnuts in it by steering it in the slightest possible angle (almost straight) and, naturally, putting the virtual foot to the floor. This can be done on the PC by using an analog controller (such as a PS2 controller through a USB converter), but not with the keyboard due to a cap on the number of simultaneous key strokes that can be accepted.

Being an enlarged truck in GTA IV, the Benson obviously suffers from poor steering, as well as a slow acceleration, but far from the worst in the game. However, the truck can achieve fairly moderate top speeds, but it will take ages to get there due to the poor acceleration. In addition, its weight does not help when the player needs to stop the vehicle while it is going high speeds. Also its ability to soak up bullets is an advantage for when the player is attempting to escape gang members or police. Being extremely heavy, the Benson can shove traffic out of its way and keep going with ease.

The badges mark the vehicle as an intercooled truck with a V8 engine. Despite its size, it sports standard disc brakes as oppose to air brakes found on trucks of a similar size, such as the Packer.

The Benson in GTA V and GTA Online performs much better than its GTA IV appearance. Its speed seems to to have improved since its last appearance, however acceleration still leaves much to be desired, not to mention the low-geared setup, meaning it takes many shifts before it can finally begin to pick up a great deal of speed, which can be a major downfall on pursuits, even despite its acceleration improvements from its last rendition. Its brute strength can withstand a barrage of bullets, making it a highly durable vehicle. The vehicle weighs slightly less than its previous appearance, but still retains its ability to push vehicles out of the way with relative ease.

The engine model appears to be a twin-cam inline-4 with a fitted turbocharger, despite the badges indicating it has a V8 engine. The Benson's engine sound is shared with the Mule, Police Riot and Stockade, however, the Benson seems to reach higher revolutions than the aforementioned trucks.

The Benson on the updated Rockstar Games Social Club.

The Benson in the cinematic preview on Rockstar Games Social Club.

A Benson with a Pop's Pills livery.

An Emperor being carried in a Benson's cargo bay 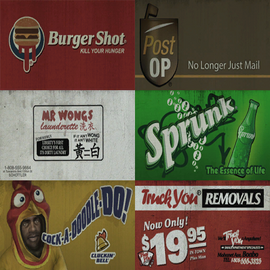 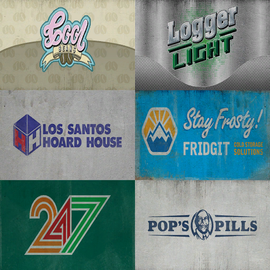 The Benson is part of vehiclemodelset "TRUCKS_DELIVERY" which commonly appears driving in and out of alleyways and parking areas.