For other characters with the same name, see Benny.

Unknown
“So, first up, I should probably say, Benny can't do this on any old car. I only work on select makes and models, but the work speaks for itself. I'm always looking to expand but, this is where we're at for now.”
— Benny to GTA Online Protagonist, upon entering his garage in an eligible car for the first time.

Benny is the owner and operator of Benny's Original Motor Works.

Physically, he is a heavyset Latino with short cropped hair and facial hair. Both forearms are visibly tattooed. He wears heavy framed glasses, shorts and a monogrammed blue or grey Benny's Original Motorworks shirt. There is a small scar visible under his left eye.

When originally introduced, he is claimed (by Lamar Davis) to work specifically on lowriders. He appears to be the only worker there who works on the cars, fitting, upgrading and respraying. Since the original Lowriders update, further updates have seen his stock and expertise diversified into high-end supercars, motorcycles, retro-modding modern vehicles back to previous generations, and lifted Donks and 4x4s.

Benny reappears in the GTA Online: Los Santos Tuners update in the LS Car Meet introductory cutscene when he drives past Mimi, Hao and the player in his customized black Hermes with the custom plate B3NNY. He can later be found sometimes attending the meets with his car.

During the mission Short Trip - Fire It Up, Lamar mentions that it was Benny who worked on Lamar's now green Emperor. 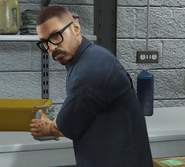 Benny in the introductory cutscene.