Contrary to its name, Belleville Park is actually a district that not only contains a small, namesake enclave of forestry, but also the surrounding urban space.

The park itself is a lush, hilly greenspace containing a maze of footpaths, complete with a pond (with an island and adjoining jetty), a boatyard and three basketball courts on the northern end, an obelisk and underground lavatories (with a detailed interior in GTA III) at the center, and a single footbridge and runs over a below-ground footpath to the south. The serene nature of the park is intended to clash with much of Staunton's heavily developed state, and is essentially the only major park in the city.

The outskirts of Belleville Park consists of multiple skyscrapers and landmarks across the road from the park. To the west, a row of seemingly residential buildings are lined along the park, as is part of an underground roadway that links Bedford Point to Aspatria. To the south are a set of skyscrapers, as well as a town hall seemingly inspired by the New York City Hall building. To the east are skyscrapers that are also partially located in Newport, including an unnamed shopping mall. Finally, the southern side of Belleville Park encompasses a large number of mixed use commercial and residential buildings. Belleville Park is also the terminating point for the Shoreside Lift Bridge, connected via a ribbon-shared overpass.

The park is loosely based on Central Park in New York City, since this rendition of Liberty City is based on New York City to a certain extent. However, Belleville Park is much smaller than its real-life counterpart. The obelisk in the park may be based on the Cleopatra's Needle in Central Park, but is only similar in the form, not in detail. Probably "Belleville Park" derives its name from the nearby Manhattan suburb of Belleville, New Jersey.

North Belleville Park is most notably the location of the player's Staunton Island safehouse in GTA III, while corrupt police officer Ray Machowski issues orders to the player from within the park's underground lavatories. In addition, a Landstalker parked in front of the park's lake is primary intended to activate a checkpoint side mission, known as "A Ride in the Park".

The GTA Liberty City Stories rendition of the park also spawns a Molotov Cocktail, a Police Bribe, TOYZ van and a Health pickup; Avenging Angels members may also be seen roaming around the area.

Staunton's fire station is located on the northwestern corner of Belleville Park, close to Aspatria, spawning a Fire Truck.

Overview of the park.

The central portion of the part, as viewed to the east.. The entrance to the underground toilet and an obelisk are visible. 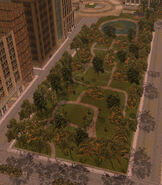 A closer view of the obelisk. It is later revealed in GTA Liberty City Stories that is a war memorial.

The skyscraper block on the western side of the district.

The "Town Hall" located on southern end of the district.

A Rise FM Headquarters building in southeastern Belleville Park towards the south and east in Newport.

The Aspatria - Bedford Point Expressway that runs underneath the west side of Belleville Park.

The entrance to the underground toilet in GTA Advance (inacessible)

The little island in the lake, GTA Advance (bigger in this game)

The restaurant that replaced the boatyard in GTA Advance.