Yes
“The modern SUV is an incredible piece of engineering: stylish, rugged, practical, safe. But if you're looking for something that managed to dodge every single one of those qualities, the BeeJay XL is the only choice on the market.”
— Southern San Andreas Super Autos description.

The car features a retro utilitarian design theme, which seems to be inspired by the Japanese styling found on the Toyota FJ Cruiser, but with a flatter, less aggressive appearance and regular second-row doors (as opposed to suicide doors). The rear bumper and fascia bears some resemblance to the first generation Toyota RAV4, while the grille and vent on the hood was likely taken from the Hummer H2.

The front of the vehicle features a bulky bumper with a silver/chrome finish on the lower portion, a central intake bearing the Karin lettering on the center and two small turn signals on either side. The upper area is mostly represented by a silver/chrome grille with six elements over a mesh pattern, while the sections beside it have dual circular headlights over silver/chrome panels. The hood area is relatively rounded on the borders and features a black slatted vent on the center.

The sides of the vehicle are defined by the black arches with an angular profile and the small body lines on top of the same, as well as the black lower portions between the arches and the small side steps at the bottom. The doors have the corresponding horizontal door handles finished in silver/chrome and the square rear-view mirrors near the cabin A-pillars, which are mostly finished in black with a silver/chrome finish on the front. The cabin area is relatively basic and features black window channels, with the A, C and D pillars painted. The roof is slightly elevated and taller on the rear portion.

The rear end of the vehicle is practically dominated by the rear compartment door, having a central silver/chrome strip over the license plate, a ridged line below the plate and the corresponding badges at the bottom. Beside the license plate area, there are modern, LED-like tail lights, consisting of outer main/turning lights, middle reverse lights and inner brake lights. The lower area is occupied by a black bumper with silver/chrome details on the sides and rear, with the corresponding mouldings for the circular exhaust pipes. The vehicle shares the same interior with vehicles like the Cavalcade and the Granger, and shares the same yellow dial set in the enhanced version.

The BeeJay XL can spawn with a primary color on the entire body and the secondary one on the roof. It also uses a set of seven-spoke wide rims with high-profile tires.

Originally, the vehicle did not have aesthetic modifications other that paintjob and rim design. This was changed at some point, where it includes modifications typical of off-road vehicles, such as a bumper with fog light and winch, roof rack and side steps. 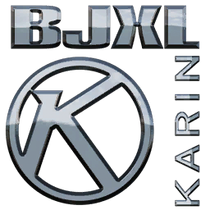 The BeeJay XL has a good top speed, however it leaves much to be desired from acceleration. Due to its heavy weight, some oversteer is noticeable, and because of this, caution must be taken when cornering at high speeds. It is also shown that it can sustain heavy amounts of damage. In terms of pick up and go, the Beejay XL is sub par in acceleration for an SUV but maintains the same level of speed from its competition such as the Gresley and the Granger. When traveling at high speeds there is a notable amount of traction loss compared to its counterparts, yet it seems to have stiffer suspension allowing the vehicle to grab a little more air than the rest.

The BeeJay XL is powered by a V8 engine, as suggested by the engine cover, which is coupled to a 5-speed gearbox in a front engine, all wheel drive layout (60% front and 40% rear). Like its real life counterpart, it has a large loud sounding engine, being similar to most SUVs in the game, such as the Granger and the Dubsta.

The BeeJay XL on the updated Rockstar Games Social Club.

The BeeJay XL in the cinematic preview on Rockstar Games Social Club. 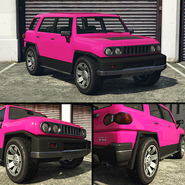