Police/Government Plate - 100%
“Ever wanted to build your very own legend, bolt by bolt, from the ground up? Well here's your opportunity. Take this old beater, give it a lick of paint and a humble Triple Intake Bug Catcher, then power-slide your mid-life crisis right across the sidewalk. Immortality almost certainly awaits.”
— Southern San Andreas Super Autos description.

The Beater Dukes is essentially a beater variant of the Dukes, sharing the same body style and features from the former. However, it has crumpled front fenders, grille, hood and bumpers, with the front bumper being held by two small straps on the driver side and a missing rear-view mirror on the passenger. It also has a worn and torn interior.

Through customization, it is possible to fix both the external damage and replace the worn interior with a cleaner variation, along with a wide range of modifications not found on its standard counterpart, such as liveries, body parts and interior upgrades. The liveries support both a rusty beater build and a pristine restored example.

Color distribution is the same as the normal Dukes, being a primary color for the body and the secondary color for the trim found around the car and the engine. It also sport unique steelie rims with a star-shaped center.

Being an updated model of the Dukes, the Beater Dukes employs a high-displacement V8 engine fitted with an oval air filter, in a similar manner to vehicles like the Gauntlet Classic and the Gauntlet Hellfire. Overall, the stats are seemingly identical to the original Dukes, making the Beater version simply a cosmetic update that is far more customizable.

The Beater Dukes with its bodywork and interior restored. (Rear quarter view) 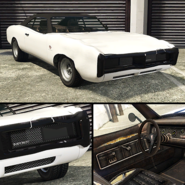 The Beater Dukes in the cinematic preview on Rockstar Games Social Club.