Beat Down on B Dup

Beat Down on B Dup

•Attack the Ballas and take over their territory.

•Go and confront B Dup.

Beat Down on B Dup is a mission in Grand Theft Auto: San Andreas given to protagonist Carl Johnson by Sweet at the Johnson House, Grove Street, Ganton, Los Santos.

Carl drops by the Johnson House and sees his brother, Sweet, about to smoke crack that one of B Dup's crack whores gave him, believing that drugs have destroyed the Families, so he may as well let them destroy him too. Carl convinces Sweet not to do it and the crack whore tells him that he will have to deal with B Dup. Infuriated, Carl throws the girl out, saying he'll deal with him right now. Carl and Sweet head over to B Dup's house in Ganton.

A basehead sitting besides the door informs them that B Dup no longer lives there and that he has moved to Glen Park (the heart of Kilo Tray Ballas territory). Carl and Sweet head to Glen Park, start a gang war and successfully take it over. They then kill B Dup's guards and head inside.

Upon entering B Dup's house, B Dup claims that he was threatened and had no choice and claims that the order came from Big Smoke, now paranoid about competition and hidden away. B Dup says that only Big Smoke's trusted lieutenants know where he's hiding. After Sweet threatens to kill him anyway, B Dup calls his "crack slave" Big Bear and orders him to kill both Sweet and Carl. Big Bear angrily tells B Dup that he's tired of smoking crack and doing his housework and punches B Dup. He asks Carl if he can rejoin the Grove Street Families. They agree, and Sweet takes Big Bear to rehab in an Infernus.

The reward for completing this mission is an increase in respect and the mission Grove 4 Life is unlocked.

Big Bear shortly after punching B Dup to the floor

Sweet about to take Big Bear to rehab 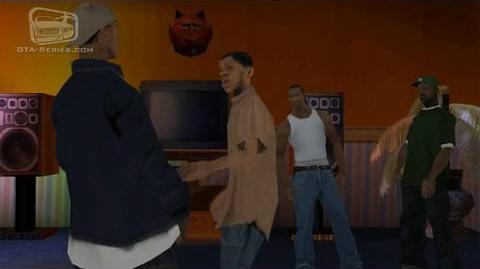 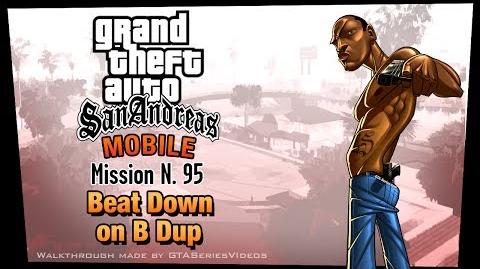 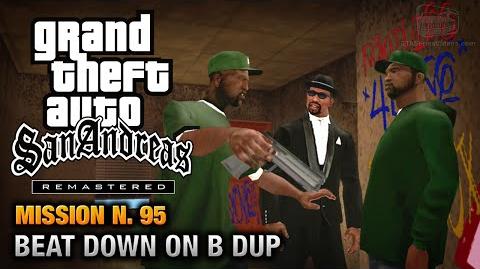