mpbeach
“Get ready to drop some sea shells with all new vehicles, weaponry and a load of new Jobs”
— Rockstar Games

The Beach Bum Update is the first content update for Grand Theft Auto Online and Grand Theft Auto V. It was free and was released on November 19, 2013 as part of the 1.06 patch. It has been stated to be the first of many free and paid updates and DLCs to be released for GTA Online/GTA V.

This update adds a few new vehicles, including off-road vehicles and a speed boat. Many new beach-themed clothing items, have been added along with two new weapons, the SNS Pistol and the Bottle.

Two new weapons are included in the update. Both are automatically added to the single player character inventory and, in Online, can be obtained for free in Ammu-Nation stores.

Notable bugfix and exploit adjustments are listed below:

Artwork for the Beach Bum Weekend. 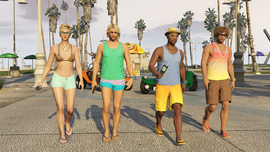 Players with new clothes and weapons. 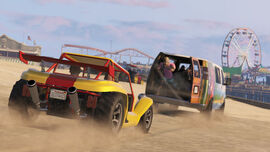 A Bifta chasing a Paradise. 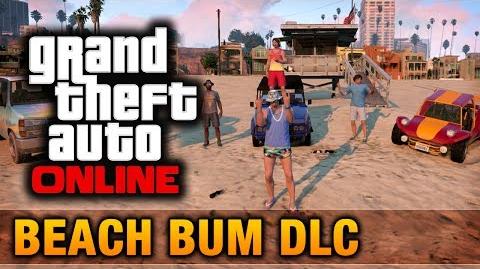