“Itchy trigger fingers across Los Santos and Blaine County, prepare yourselves for Battle Week: whether you’re armed to the teeth and under fire in Hardest Target, on the hunt for an Insurgent on the shrinking perimeter in Motor Wars or dodging shotguns in the dark in Slashers, Battle Week brings 2X cash and RP for those happy to go down fighting.

Plus, get key Battle Week discounts on the Chernobog mobile ballistic missile launcher, the Avenger - a flying fortress with a workshop to upgrade your weapons - and take advantage of Mk II discounts and savings on some of Ammu-Nation’s most popular armaments. All this as well as the release of a brand new rugged off-roader to add to your collection of vehicular bullies.”
— Rockstar Games Newswire

Battle Week was an event in Grand Theft Auto Online. The event started on February 6th, 2018, and ran until February 12th, 2018. This event featured discounts on vehicles and weapons, and double GTA$ and RP rewards in selected Adversary Modes.

Discounts on numerous vehicles and upgrades from Warstock Cache & Carry:[9] 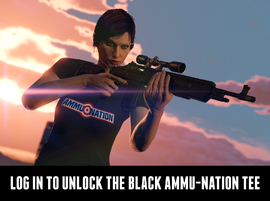