GTA Wiki
Register
Don't have an account?
Sign In
Advertisement
in: Vehicles, Vehicles in The Lost and Damned, Vehicles in GTA V,
and 8 more
English

“The ultimate in going 0-80 in 2.3, then 80-0 in a fraction as you slide under a tractor trailer truck.”
— Southern San Andreas Super Autos description.

“A cutting edge race-replica, this bike features a 1000cc liquid cooled in-line 4 cylinder engine which produces over 180bhp through a 6 speed gearbox to its 200 section rear race spec rubber. Its thoroughbred components ensure a nigh on 200mph limit can be reached easily whilst its 320mm dinner plate sized brake discs bring things to a stop on mo' fucking' dime. The single sided rear swingarm perfectly shows off its lightweight alloy rear wheel while the Underseat exhaust makes sure your bitch's ass stay warm”
— Uptownriders.net description.

In The Lost and Damned, the Bati 800 is largely modeled with inspiration from the Ducati 848 or the Ducati 1098, while the tail unit bears more of a resemblance to the self-supporting item of the Ducati Desmosedici RR minus the top-exit exhausts.

The Bati 800 is depicted as an upmarket sports bike with similar traits to the NRG 900. The front section has a carbon-fibre fender/mudguard mounted directly to the forks, while the upper area features a long fairing with dual intakes and a set of headlamps. The upper section of the fairing is curved and houses a triangle-shaped glass on the centre and black mirror wings on top, while the area behind it is mostly finished in carbon fibre and has analog dials. The upper clamp/plate has two independent handlebars.

The sides of the bike are distinguished by its bulky fairing that includes the upper front section, having dual exit vents on either side and a carbon-fibre lower fairing with smaller vents on the rear, as well as silver lettering displaying the name and the manufacturer of the bike. The fuel tank is rather large and also bears silver lettering displaying the manufacturer, while black foot pegs are seen on the rear portion, intended for the rider.

The rear section features a black seat for the rider, two side intakes on the rearmost portion and additional foot pegs for the passenger, while the rear end has dual red tail lamps, dual exhaust pipes partially wrapped by a carbon-fibre section, and a black plate holder with the license plate and the two turn signals. The rear wheel is connected by a single-sided swing-arm with a carbon-fibre mudguard and a single suspension spring, along with the corresponding chain drive and sprocket on the left side.

The bike is painted with a primary colour on the bodywork and the outer surrounding of the rims, while the secondary colour is applied on the portion of the front fairing around the glass, in the form of wide stripes on the sides and the portions housing the rear intakes. It uses unique 7-spoke black rims, wrapped in medium-profile tyres.

The motorcycle appears again unchanged in Grand Theft Auto V and Grand Theft Auto Online, albeit named Bati 801, which matches with the badges. In the enhanced verstion, it gains a restored "Sports Bike" analog dial set, also shared with the PCJ-600 and the Akuma. The Bati uses PCJ-600 light textures.

Colour distribution is more or less identical, but the outer surroundings of the rims are painted with the wheel colour, which can be painted by selecting a custom rear wheel, applying a colour and change back to the stock wheel (as it won't reset to the default alloy colour). It retains the same 7-spoke rim design similar to the "Racer" rims available in Los Santos Customs, albeit finished in a silver/alloy colour. The aforementioned "Racer" rims, however, are finished in black, being identical to the original ones from TLAD.

Even as its performance and light body weight is considerably good and already ranks above nearly all choppers in TLAD, the Bati 800 is at the lower-end of the high-end bikes, with the slowest acceleration and top speed. However, the bike's lower engine power is a blessing in disguise; it gives the bike better stability during accelerations and cornering, and minimizes excess burnouts and spinouts.

The Bati 800 is stated to be powered by a 1000cc, liquid-cooled 4-cylinder engine, which is somewhat reflected by the exhaust manifold. Oddly, the Bati 800 is stated in the website to have a 6-speed gearbox, yet the game files and in-game testing prove that the vehicle only bears 5 gears. The bike shares the low-pitched and mid-revving engine sound from the NRG 900.

In Grand Theft Auto V and Grand Theft Auto Online, the Bati 801 is one the fastest bikes in the game. With its excellent acceleration and good handling, it is a very stable and nimble bike. One should be careful with the Bati 801, as its light body can often result in being launched or even wasted when encountering bumpy terrain. As of Update 1.16, it was outpaced by the Hakuchou, but still makes up for its better acceleration. Compared to the similarly priced Double T, the Bati 801 feels slower, but it is more stable and more user friendly to operate, making it an ideal sportsbike for beginners. Southern San Andreas Super Autos states that it can reach "80 in 2.3 seconds" without specifying whether this is kph or mph. Using the enhanced version's speedometer, it can be proven that unmodded the bike does reach approximately 80 kph in that time.

The Bati 801 has a rather low-pitch engine tone compared to other performance motorcycles, which is shared with the Bati 801RR and the Thrust.

A Bati 801 in the original version of GTA V. (Rear quarter view). 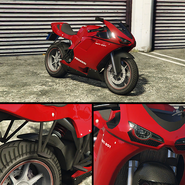 The Bati 801 on the updated Rockstar Games Social Club.

The Bati 801 in the cinematic preview on GTA V Rockstar Games Social Club.

The Bati 801 in the cinematic preview on GTA Online Rockstar Games Social Club.