While many basketball courts can be seen through the series, only Grand Theft Auto: San Andreas allows the player to actually play basketball. The player can score points by shooting the ball into a basketball hoop — the farther the distance, the more points the player gets — but has little to benefit from it other than having bragging rights. The player can also do tricks like spinning the ball with CJ's finger, or executing slam dunks by moving closer towards the hoop.

Although the player can't play with others and can only play with him/herself in GTA San Andreas, they can activate a mini-challenge to attain the most number of scores within an allocated time. The ability to play basketball is unlocked after completing the mission "Tagging Up Turf", when basketballs may appear in basketball courts. In the original PS2 version, it is available from the beginning.

This is a list of locations of basketball courts. 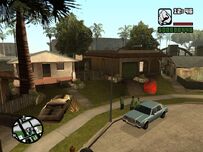 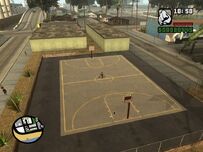 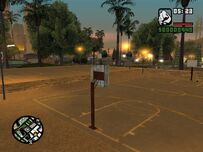 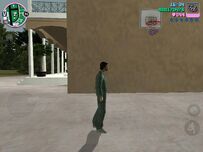 A basketball court in Starfish Island Vice City, like all the other games except GTA San Andreas basketball is unaccessible.

Sweet and Big Smoke playing basketball during the cutscene for Tagging Up Turf.
Add a photo to this gallery

Retrieved from "https://gta.fandom.com/wiki/Basketball?oldid=1148695"
Community content is available under CC-BY-SA unless otherwise noted.