The Baseball Bat on the Rockstar Games Social Club website.

Wikipedia has an article on:
Baseball bat

“Aluminum baseball bat with leather grip. Lightweight yet powerful for all you big hitters out there.”

The Baseball Bat is one of the first melee weapons featured in the series. It is, by far, the easiest weapon to obtain, with one always at the safehouse in the games taking place in Grand Theft Auto III and Grand Theft Auto: Liberty City Stories and a common sight throughout the other games. The baseball bat is also commonly seen in the hands of gangsters, mobsters, and sometimes civilians.

Through the series, the Baseball Bat concept remained the same, with little cosmetic changes that differs in each game or universe.

In the first mission in GTA San Andreas, the bat that Big Smoke is holding appears to be wooden, instead of the aluminium one available in-game. Also, in the mission Running Dog, Big Smoke is again seen using a wooden bat to knock out a Vagos gang member. It clearly produces a wooden sound when Big Smoke drops the bat. It implies that the wooden bat was supposed to be reused for said game, but ended up using the aluminium one for some reason.

The Baseball Bat in Grand Theft Auto IV and Grand Theft Auto: Episodes from Liberty City remained similar to the rendition post-San Andreas, having an aluminium appearance and no markings.

In an early version of GTA IV, a wooden baseball bat appeared in the hands of various gangsters in a Weazel News report, clearly having a brown appearance rather than the grey one depicted in the current bat, suggesting those were wooden.

The bat is first seen in the mission Bull in a China Shop, where Vlad gives Niko one of these for the task, but he refuses to use it.

Aside from the standard aluminium bat, a bloody version also exists as a prop based on the same bat found in EFLC, as well as a wooden one in TLAD.

For Grand Theft Auto: Chinatown Wars, the baseball bat is a wooden one, like the GTA III rendition.

In Grand Theft Auto V and Grand Theft Auto Online, the Baseball Bat is of aluminium again, but now has various markings on it, including "G.E.S.", "XL" and the Ballas "B" logo, as well as the "Western States Baseball League" logo on it.

In the 3D Universe, the Baseball Bat can easily kill pedestrians, police men, and mobsters in two hits, the first hit flooring them, the second finishing them while still on the ground.

Being a club-based melee weapon, the Baseball Bat generally has longer range than most melee weapons, tied with the Machete and the Katana.

In Grand Theft Auto IV, The Lost and Damned and The Ballad of Gay Tony, the Baseball Bat is a cumbersome but effective melee weapon. While not as lethal or fast as the Knife, it can reach their targets easily, giving them no chance to hit the wielder during a melee combat, as it kills in about three or four hits. If timed properly, when a player swings the baseball bat (the swing that is performed when no one is targeted) at a person holding a gun, there is a chance of disarming the person with the gun. Players should be cautious if they were to do this, since they must be in front of the person holding the gun. The chance of knocking a gun out of a person's hands is bigger with Handguns and Submachine Guns. The Baseball Bat can also be used for a one-hit kill counter-attack, by dodging an attack with the Bat equipped, and pressing the attack button. The characters will attack their enemies either with the bat's thick barrel or with the end of the bat (also called top or cap), usually knocking them down instantly. Also, hitting the head of an NPC with any of the attack buttons (without counter-attacks) will knock them down instantly or even killing them, similar to the Fist.

In The Lost and Damned, the bat is used to hit other racers in Bike Races (singleplayer or multiplayer). Depending of the force of the hit, a weak swing can push their rival bikers away from the player, causing them to lose control of their bikes for a few seconds. With a strong swing, they can knock other bikers off their bikes (except Terry or Clay), or, in multiplayer modes, dealing good damage over them (requiring almost the same hits as when in foot).

Using the Baseball Bat against vehicles will cause to deform them easily or break any exposed part (such as open doors and windows). With enough hits, the car can be set aflame, especially helicopters, as they are more sensitive to deformation than land vehicles.

Unlike the Nightstick, the Baseball Bat knocks people to the floor, which leaves some time to kill them while in the ground. It is largely similar to the 3D Universe iterations, being a cumbersome melee weapon with high damage.

The Baseball Bat remains largely similar to the Grand Theft Auto IV iteration, being also able to kill enemies with a hit on their heads.

The weapon is statistically one of the strongest melee weapons, tied with the Golf Club and the Pool Cue.

Claude with a wooden Baseball Bat.

The wooden bat used by Big Smoke in the cutscene of the mission Big Smoke. 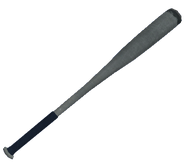 Grand Theft Auto IV, The Lost and Damned and The Ballad of Gay Tony.

A wooden Baseball Bat in The Lost and Damned. 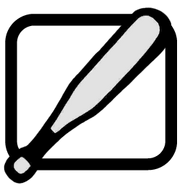 Grand Theft Auto IV, The Lost and Damned and The Ballad of Gay Tony.

Artwork of Franklin with a wooden bat and Chop on a chain.

In this game, the Baseball Bat cannot be purchased at Ammu-Nation, and must be obtained from one of a number of different locations around San Andreas where it spawns.

The baseball bat is, again, unable to be purchased and only appears in missions. However, if they are picked up, the player can retain them.