In-game time
“Exciting news - we're expanding the TP Industries fleet with a Cargobob! All we need is you to get a hold on one from Fort Zancudo. I can lend you the plane at our airfield to get there, but you got to promise to bring it back. Oh, and you should probably take out the fighter jets so they don't come after you. R. Jakowski.”

Base Invaders is a mission in Grand Theft Auto Online given to the player by Ron Jakowski. It is available for up to 4 players.

The player gets a message from Ron telling him what he needs doing. The player goes to get Ron's Velum from the Sandy Shores Airfield. They then must fly to Fort Zancudo and land without damaging the aircraft. Once there, they must kill the soldiers and destroy the P-996 Lazers to make sure they don't chase him afterwards. Then, they must go into the hangar, kill the guards, and steal the Cargobob. The mission ends once the Cargobob is successfully landed at the Sandy Shores Airfield. The monetary award is $25,000 and the RP ranges between difficulties. 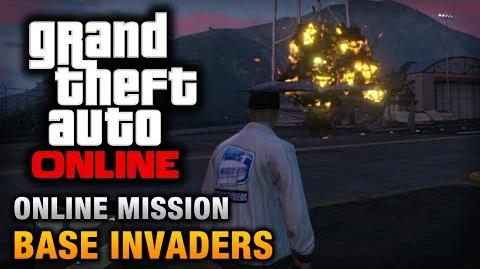