Wear them before they wear you
Wear it in

The brand seems to manufacture urban-style clothing made for sports people, such as cyclists and skateboarders. It also seems to have "gangstas" as one of its targets because it has such themes on the advertisements and uses rappers on them as well.

A Base 5 hoodie can be purchased from Sub Urban for $105. Several billboards for the company are found around the state, and Hotring Racers have Base 5 sponsor stickers on the sides.

There appear to be five characters used in the advertising material:

Another poster has OG Loc superimposed on it but is in a different art style to the original five characters.

Several posters of the brand are found in Ryder's house.

A particular young pedestrian that can be spotted either walking casually or riding BMXs in GTA San Andreas wears a gray Base 5 t-shirt with the dog on the front and the logo on the back. He dons a black baseball cap with the "5" logo on it, indicating that Base 5 also produces hats.

A red Base 5 T-shirt was available in Grand Theft Auto Online through a special crate drop during the Festive Surprise Update. 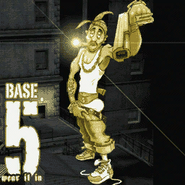 Poster that appear in Ryder's house. 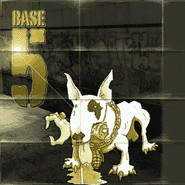 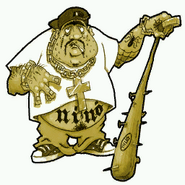 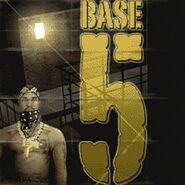 OG Loc on the Base 5 poster. 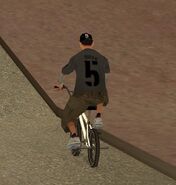 The pedestrian in GTA San Andreas using a t-shirt and baseball cap bearing the Base 5 logo on them riding a BMX.

The dog on the front of the NPC shirt.

Base 5 T-Shirt in GTA Online.
Add a photo to this gallery
Retrieved from "https://gta.fandom.com/wiki/Base_5?oldid=1183216"
Community content is available under CC-BY-SA unless otherwise noted.