View source
This article is about the character in Grand Theft Auto V. For other characters with the same name, see Barry.

Tuck Milligan
“We're gonna bring down the government by smoking weed together in a public place. It's very effective. I'm prepared to be a martyr, friend... Are you?”
— Barry

Barry is a minor character in Grand Theft Auto V. He is encountered in three separate Strangers and Freaks missions.

Barry is a well-dressed, middle-aged marijuana legalization advocate who is trying to get citizens of Los Santos behind his campaign. In defense of his position that pot should be legal, he generally spouts anti-establishment rhetoric and extols the virtues of smoking marijuana. He apparently grows his own weed, carrying joints with him so that he can coerce listeners into smoking the drug, in the hope of swaying their opinion toward legalization. He appears to have bloodshot eyes, a sign of his constant marijuana usage.

Based on his distrust of the government and his dedication to marijuana legalization, Barry could be a libertarian, or hold libertarian views. However, Barry proves to be an ineffective advocate for his cause, in that he not only angers Michael, Trevor, and Franklin, but also suffers from intense hallucinations and paranoia, most likely due to his excessive smoking of his own product.

Barry appears in three different Strangers and Freaks missions, each of them with one of the three Protagonists.

The first one to be available is the one with Michael. When Michael meets Barry, he's manning a makeshift information table in Legion Square. Barry is attempting to get signatures for his petition to legalize marijuana, and tries to enlist Michael in his cause, but Michael declines, saying he has no interest in "reefer". Barry persists, offering Michael a joint to share. At first Michael tries to refuse, but Barry says that he grows the weed himself and that there's "no paranoia, no weirdness, just a passport to nirvana". Michael relents and takes a drag on the joint, which causes him to experience extreme hallucinations.

Michael's hallucination involves being rushed by aliens who are trying to abduct him, while he fights back with a minigun. After the drug wears off, Barry tells him that they've been having a long conversation about topics such as globalization and the liquor industry, completely oblivious to Michael's visions. A highly agitated Michael tells Barry to stay away from him.

The second encounter with Barry is as Trevor. Barry will be once again at his table in Legion Square. He will try to convince Trevor to sign the petition, but Trevor says that he makes a lot of money with weed and the last thing he needs is a legalization. Barry once again offers to share a joint, and although Trevor puts up some resistance, he has less trouble convincing him to smoke than he does Michael. Of course, once again the drug causes hallucinations.

Trevor's hallucination in which clowns are attacking him with firearms, many piling out of brightly-colored vans. Trevor defends himself with an assault shotgun, taking out clown and van alike. The hallucination ends, and once again Barry has been talking the whole time, totally unaware of Trevor's visions. Trevor bolts from the square in a panic.

The third and final encounter with Barry is with Franklin, and it's divided in multiple parts. This time, Barry will be found in front of an abandoned store on Sinner Street in Textile City. Barry tells Franklin that he is planning a "smoke-in" in front of City Hall, an event which he hopes will help to bring down the government. He then offers a joint to Franklin so they can "warm up" before getting the "supplies". Unlike Michael and Trevor, however, Franklin doesn't hallucinate, and even complains that the weed is "a little dry". Some time later, Barry will send a text message to Franklin showing the location of the supplies.

The supplies will be in two different vehicles: one inside a Duneloader in Murrieta Heights that's being watched by the cops and the other inside a broken-down Emperor in a La Puerta junkyard. After delivering both of the vehicles to Barry's apartment in Vespucci, (while avoiding cops and towing the Emperor respectively,) Barry will send a text message to Franklin saying to met him in front of City Hall on Occupation Avenue to participate in the smoke-in.

Franklin goes to City Hall, but finds no one there. He calls Barry, who says that he didn't forget the smoke-in and will be right there. Franklin, frustrated, leaves the area. 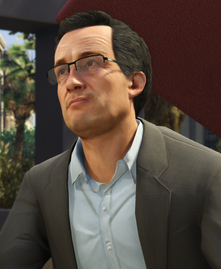