Standard White - 100%
“Everyone knows that when your enemies are fleeing in hysterical terror they will run and hide in the most hard-to-reach places. And what's the use of your trusty 50cal turret if there are nooks, crannies and boltholes you can't poke it into? Enter the Barrage: one of the most versatile and resilient off-roaders on the planet equipped with upgradeable front and rear-facing turrets. Running and hiding just got a whole lot harder.
Please note: This vehicle can be modified at a Vehicle Workshop inside an Avenger or Mobile Operations Center.
”
— Warstock Cache & Carry description.

The HVY Barrage is a weaponized ATV featured in Grand Theft Auto Online as part of the The Doomsday Heist update.

The Barrage is evidently based on the HDT Storm SRTV (Search & Rescue Tactical Vehicle) for the overall design and purpose, although its size and functionality leans more to the HDT Sword ITV (Internally Transportable Vehicle), as it can be transported internally by a V-22 Osprey (whose GTA equivalent is the Avenger).

The Barrage assumes a small, lightweight design with ample room for four occupants. On the front, the vehicle has a steel bumper with numerous holes on it, two small circular turn signals on the edges and a winch cable on the center. On top of the bumper, there are various ammo boxes strapped to the vehicle and rectangular headlights with a mesh cover on them. Both the bumper and the headlights are mounted over a steel-tube frame located in front of the bodywork, while the front section is narrower on the front end, has large wheel arches and a small hatch on the center, which opens to reveal a storage compartment.

On the sides, the vehicle has large tubular side steps at the bottom and small access doors, while the cabin has steel-tube pillars around and lacks windows. The roof has a LED floodlight bar on the front and a dedicated section for the top/front turret. The interior of the vehicle uses the same dial set as race-type vehicles like the RE-7B or the ETR1, but arranged in a way that the digital display and two analog gauges are centered to the driver's seat, while five additional analog gauges are seen on the center of the vehicle and facing to the driver side. The central console has several equipment reused from aircraft like the FH-1 Hunter and the Akula, with the green screens being used as the radio display and the additional display from the main one. Directly behind the seats there are two fuel canisters.

On the rear section, the vehicle has carbon-fiber details on the wheel arches and square-shaped sections housing side-exit exhausts and rear-facing vents, while the upper area has large panels with durbar bars on it. The rear end has a small tailgate, a license plate on the passenger side and rectangular tail lights, along with a steel-tube frame on the outer edges and the bottom side. The rear bed contains tubular frames holding a spare wheel and small storage compartments on either side, while a bracket-shaped frame can be found connected to the upper panels, holding a rear turret mount.

The underside of the vehicle is predominated by the tubular chassis found around the front and middle sections. Its suspension setup is very similar to vehicles like the Liberator, the Marshall and the Guardian, featuring dual shock towers and suspension springs connected to the body, as well as four torsion bars or kicker braces running from the center of the vehicle down to the suspension lever arm. A set of driveshaft loops can be also seen protecting the driveshaft from damage on its underside if was to fall off in the event of a U-joint (Universal Joint) failure.

The car is prominently painted in a primary color for the bodywork, the details of the suspension shocks/springs and the stitches of the steering wheel, while the tubular frames and the suspension springs are painted in a secondary color. It uses a set of wheels identical to the "Mudslinger" off-road wheels available in Los Santos Customs.

The Barrage has great top speed and acceleration thanks to its lightweight design and the all-wheel drivetrain. The off-road wheels and the high suspension allows it to cross terrain and small obstacles with no trouble. Even with no engine upgrades, the vehicle performs exceptionally well, but tends to bottom out on rough landings and lose speed or control, so caution should be taken when taking jumps.

The vehicle's engine appears to be located on the middle of the vehicle, as the exhaust tips are located directly behind the cabin area. Said engine is coupled to a 5-speed gearbox in a mid-engine, all wheel drive layout (50% front, 50% rear). Its engine sound appears to be a slightly louder variation of the one used in most SUVs and off-road vehicles, such as the Bodhi and the Granger.

For a lightweight ATV, the Barrage is surprisingly strong, requiring five rockets from a Rocket Launcher, about 12 missiles from a Homing Launcher and 12 shots from a Heavy Sniper Mk II with explosive rounds, making it an ideal choice for getaways or fighting off against most targets. However, the light mass will cause the vehicle to be thrown easily by vehicles armed with missiles, potentially flipping down the vehicle and knocking the gunners in the process.

The vehicle offers limited protection against gunfire due to the open cabin, leaving the occupants highly vulnerable. This issue can be partially solved with the addition of armor options, with the "Durbar Cage" options adding a front central plate that protects the front occupants from certain angles, and the "Reinforced Frame" options covering the area below the turret bracket, partially protecting the rear gunner. The "Door" options do not protect the front occupants on the sides, and also hinders them from using drive-by weapons.

The Barrage is equipped with two turrets that are operated by two independent gunners and require manual access by climbing to the respective sections, as there is no option to switch seats. The top/front turret has a rotation angle of 360 degrees and an elevation range of -20 and 30 degrees (similar to the Insurgent Pick-Up), serving as the primary/offensive option. The rear turret, on the other hand, offers a limited rotation angle of 112.5 degrees and a slightly smaller elevation range of between -15 and 25 degrees, being intended for rear defense. Both turrets can be equipped with the following weapons:

The Barrage can only be modified at a vehicle workshop inside a Mobile Operations Center or an Avenger.

* Denotes items that can only be unlocked for purchase via Research in the Bunker property.
E Awarded to players who logged on December 27, during the Festive Surprise 2018 event.

When purchased, the Barrage comes painted in the following colors by default:

The Barrage on the updated Rockstar Games Social Club.

The Barrage in the cinematic preview on Rockstar Games Social Club. 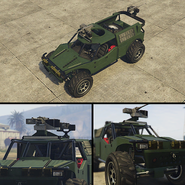 The Barrage on Warstock Cache & Carry. 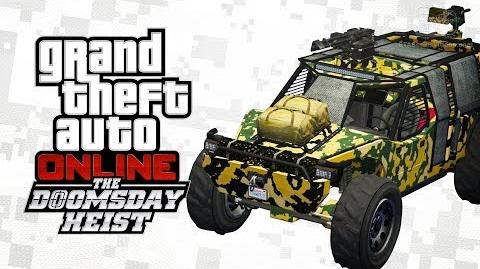