The Barracks Semi is the semi-truck adaptation of the Barracks, where the rear is adapted to attach trailers, as the name suggests. The vehicle is heavily based on the M915A5 Tractor Trailer, sharing the initial body shape, grille attachments and color scheme.

The Barracks Semi shares the same cab design as its transport variant, while the entire rear section is likely used from the Packer, another semi-truck in the game, only with the desert brown color to match its military scheme. The rear lamps are practically the same as those of the semi-trucks in the game, excluding the Docktug. The Barracks Semi, however, lacks the spare tire mounted behind the cabin.

Due to its shorter wheelbase, it has better performance in handling and turning, and above average acceleration when compared to similar vehicles and its trooper counterpart, the Barracks. The vehicle is very stable and easy to control. However, the brakes are much less responsive, taking a while to stop even at the lowest of speeds. The Barracks Semi is capable of pulling trailers much faster than normal semi tractors. The Barracks Semi does burnouts easily, but will not do donuts on pavement (possibly due to the double rear axle and comically oversized front wheels), it will however do extremely slow donuts on dirt.

Much like the standard Barracks, the vehicle is powered by the same inline-4 engine, coupled to a 5-speed gearbox in a front engine, rear-wheel drive layout. Oddly, the Barracks Semi is 1000kg heavier than its passenger transporter variant. 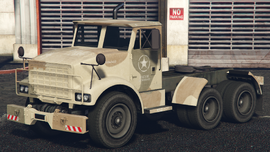 A Barracks Semi with a brown camouflaged tanker trailer.

The Barracks Semi on the Rockstar Games Social Club.

Retrieved from "https://gta.fandom.com/wiki/Barracks_Semi?oldid=1154674"
Community content is available under CC-BY-SA unless otherwise noted.