The Barracks in GTA V.

"Hope you've got a big garage. A 6-wheel army personnel truck with reinforced frame and suspension, the Barracks is ideal for transporting armed troops and car-pooling obese American kids. Built by the US in the 1980s, sold to Iraq in the 1990s, captured from the Iraqis by Americans in the 2000s, the Barracks has a complex bloodline that took us days to get off the seats."
―Warstock Cache & Carry webpage, GTA V

The Barracks OL is a military truck featured in the following games:

In GTA V, it is manufactured by HVY.

Appearing on the streets only when the player achieves a 6-star wanted level, the Barracks OL is a military truck based on the M939 "5 ton" truck. When first introduced in GTA III, it was visually very similar to the Flatbed truck, differing only in its body colors and its modified bed design with additional fencing. Unlike the Flatbed, the Barracks OL underwent fewer modifications after GTA III, retaining its rugged, military-like design.

The Barracks OL comes with three types of bed configurations: uncovered, uncovered with framing, and fully covered; GTA San Andreas' Barracks, however, features only two bed configurations: covered with tarpaulin, or covered with camouflage netting (revealing boxes on the bed), and, although very rare (uncommon on the mobile version), an uncovered version that resembles a Flatbed. From GTA Vice City onwards, Vigilante missions can be activated from the Barracks OL. In GTA San Andreas, the Barracks even features a siren without strobe lights, which, like other sirens, will force traffic in front of the truck to move out of the way.

The GTA San Andreas and GTA Advance renditions feature closed cabs, while all other renditions in the 3D era feature open cabs. Despite the Barracks' huge size, it is only capable of carrying the driver and one passenger.

The vehicle returns in GTA V with a new design and a new paint scheme, based on the Oshkosh MTVR, but with a bulkier design, a large bumper and a bullbar. Like GTA SA and GTA Advance renditions, it retains the closed cab and comes in only 1 bed configuration, consisting on roof frames and a big canvas on the upper side. The front cab appears (like many other heavy duty vehicles) to have some resemblance to the Securicar. This vehicle carries a spare tire behind the cab.

Obtaining it in the standard way may be difficult, due to the fact that military no longer chase at the protagonist/player in streets. Once they are at Fort Zancudo, as the Rhino tanks now shoot at the player, it becomes a challenge. However, like some other military vehicles, they can be purchased from the Warstock website.

Unlike the 3D Universe rendition, the Barracks is capable of carry the driver and 9 passengers, which in GTA Online can be a useful and deadly ground transport. However, there are many disadvantages for any rear bed occupants: Any crash over the rear section will eject and harm them with the truck's weight and the fall (depending of the crash), they will be exposed to a gunfire, and, considering the vehicle's size and speed, can be an easy target for any explosive weapon, especially RPGs.

The "Army Truck", an earlier iteration of the Barracks OL in GTA III prior to the game's release.

Although it is one of the heaviest vehicles in the games, it is faster than the much lighter Flatbed; due to its length and its two rear axles, however, it suffers from understeer at higher speeds. Its ramming power is impressive; it can easily penetrate a SWAT roadblock. The Barracks OL has all-wheel drive, but, because of its size and weight, it can easily get stuck in off-road terrain. Despite its size, the Barracks will explode if it collides with a Rhino tank, just as other vehicles do. The Barracks OL has an average top speed but the acceleration leaves much to be desired.

Being heavier than before, the acceleration is still a problem when used as a getaway vehicle. However, it's extremely competent for off-roading, thanks to the raised suspension and large wheels. Its natural force can become a threat to any light vehicle and small trucks, like the Mule, and can withstand several crashes before the front axle is deformed. The only problem is that the cab doesn't offer much protection against gunfire, yet the overall vehicle can withstand several bullets before starts to smoking. Driving backwards, it can actually drive all the way over any car, just like a tank. A flat tire makes a minimal difference to handling. 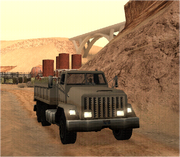 A Flatbed variant of the Barracks.

Spawned at Elysian Island.
Add a photo to this gallery

Retrieved from "https://gta.fandom.com/wiki/Barracks_OL?oldid=816484"
Community content is available under CC-BY-SA unless otherwise noted.