Police/Government Plate - 100%
“6-wheel personnel truck. Sure, you don’t have an army yet. But out there, you’re bound to make some equally homicidal BFFs. Request it from Pegasus Lifestyle Management.”
— Career Builder description.
“Hope you've got a big garage. A 6-wheel army personnel truck with reinforced frame and suspension, the Barracks is ideal for transporting armed troops and car-pooling obese American kids. Built by the US in the 1980s, sold to Iraq in the 1990s, captured from the Iraqis by Americans in the 2000s, the Barracks has a complex bloodline that took us days to get off the seats.”
— Warstock Cache & Carry description.

The Barracks OL is evidently based on the M939 "5 ton" truck, namely the M923A1 Cargo version, albeit featuring an extra set of lights beside the grille.

The Barracks OL is depicted as a 6-wheeled truck intended for transportation of cargo/infantry, featuring an utility cab with room with two occupants.

From GTA Vice City onwards, Vigilante missions can be activated from the Barracks OL. In GTA San Andreas, the Barracks even features a siren without strobe lights, which, like other sirens, will force traffic in front of the truck to move out of the way.

The front of the truck is predominated by the reinforced utility bumper, featuring two hooks and warning stripes on the outer sides. A winch can also be seen behind the same bumper. The cab appears (like many other heavy duty vehicles) to have some resemblance to the Securicar, but has circular headlamps and protective frames in front of the grille, along with a separation on the windshield and access steps on the sides. Behind the cab, there is a spare tire and the exhaust stack on the passenger side.

The rear of the truck is occupied by the large truck bed, featuring sectioned walls and upper frames with a canvas on top. Some of the vital components, such as the oil tanks and the fuel tanks, can be seen beneath the bed, next to the rear wheels. The wheels themselves have a set of mudguards. The rear end is basically the tailgate of the bed and a small bumper, holding two panels housing the circular tail lights.

The Barracks spawns with a military desert camo livery with the corresponding star emblems. The truck itself appears to have a slightly worn appearance, denoting its utilitarian design. It uses high-profile tires with black plain steel rims.

Although it is one of the heaviest vehicles in the games, it is faster than the much lighter Flatbed; due to its length and its two rear axles, however, it suffers from understeer at higher speeds. Its ramming power is impressive; it can easily penetrate a SWAT roadblock. The Barracks OL has all-wheel drive, but, because of its size and weight, it can easily get stuck in off-road terrain. Despite its size, the Barracks will explode if it collides with a Rhino tank, just as other vehicles do. The Barracks OL has an average top speed but the acceleration leaves much to be desired.

In San Andreas, the Barracks is a formidable threat to the player on a six star wanted level - Combined with the Rhino, the Military will use the Barracks to actively ram the player off the road or box them in, and can easily overtake less powerful vehicles.

All renditions of the Barracks are powered by a diesel engine, coupled to a 5-speed gearbox in an AWD layout.

The Barracks is extremely competent for off-roading, thanks to the raised suspension and the large wheels. Its brute force can become a threat to any light vehicle and small trucks, like the Mule, and can withstand several crashes before the front axle is deformed. The overall vehicle can withstand several bullets before it starts to smoke. Driving backwards, it can actually drive all the way over any car, just like a tank. A flat tire makes a minimal difference to handling. The Barracks appears to be lighter than in the 3D Universe, but is still a difficult vehicle to drive. Its acceleration is rather low and, due to its large profile, the handling is very rigid.

Unlike the 3D Universe rendition, the Barracks is capable of carrying the driver and nine passengers (one in the cab and eight in the truck bed), which in Grand Theft Auto Online can be a useful and deadly ground transport. The only problem, however, is that flipping the truck will eject and harm all occupants of the bed, potentially killing them in the process. Considering the vehicle, size and speed, it can be an easy target for any explosive weapon, especially RPGs and Grenade Launcher.

The Barracks is powered by a four-cylinder turbocharged engine laid longitudinally, coupled to a 5-speed gearbox in a RWD layout. 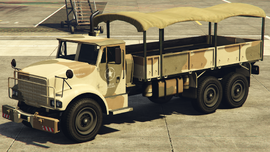 The "Army Truck", an earlier iteration of the Barracks OL in GTA III prior to the game's release.

A Barracks in use as part of a Roadblock. 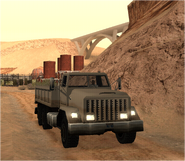 A Flatbed variant of the Barracks.

A Barracks with an invisible cover that rarely spawns around Verdant Meadows after attaining a 6 star wanted level.

Design of the Barracks in Grand Theft Auto Advance.

The Barracks on the updated Rockstar Games Social Club.

The Barracks in the cinematic preview on GTA V Rockstar Games Social Club.

The Barracks in the cinematic preview on GTA Online Rockstar Games Social Club.