The building is located between the streets of Barium and Calcium (foot way) and roads Privateer and Borlock. 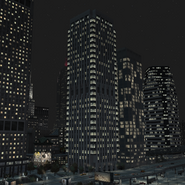 As seen from Privateer Road.

Sculpture at the front of the building.

Walkway between the building and its neighbor, Borlock Road Building.

The building as it appears in Grand Theft Auto: Chinatown Wars.
Add a photo to this gallery

Retrieved from "https://gta.fandom.com/wiki/Barium_Street_Building?oldid=1122805"
Community content is available under CC-BY-SA unless otherwise noted.