In-game time
“We've been working on a nice little sting operation for some light-fingered dealers, trackers in the chips at their tables. I figured you'd want in at the pay off. I'll send you the coordinates, you recover the chips. I doubt you'll need to get your hands too dirty. Most of them will probably hand them over as soon as they see the gun I don't officially know you have.”
— Agatha Baker's briefing.
“So, we've been hemorrhaging chips the last few weeks. Standard OP: we got it pinned down to a few of the newer dealers on staff, ran a few tagged chips through their tables, and bingo. I'm sending you the last-known GPS now. I don't incite or condone threats of violence; I'd just like to observe that they're likely to cooperate if they see you're armed. The rest I leave to you.”
— Alternative briefing.

Bargaining Chips is a Casino Work mission featured in Grand Theft Auto Online as part of the The Diamond Casino & Resort update. It is a freeroam mission given to the player by Agatha Baker.

Five semi-random search areas will appear on the map, and the player needs to make their way to each one and find a thief at the location. Once they are found, the player must threaten them with a weapon to persuade them to hand over the chips. Some dealers will cooperate immediately, but some will run away or even try to attack the player with a Switchblade. If the thieves run away, they can be shot in the leg and will usually stop and give up. Killing the thief is also a viable option, but there is the risk of attaining a wanted level.

When arriving at a search area, Agatha will send the protagonist a text. At some locations, such as Broker Park or the fountain plaza next to the IAA Headquarters, she will provide an image of the thief. At locations, such as the Galileo Observatory and the University of San Andreas, she will send an image of that location's security camera feed, showing the exact location of the thief.

In locations, such as Del Perro, Mirror Park, Pacific Bluffs, and Vespucci Beach, however, she will instead send an image of the vehicle the thief was seen in. For those four locations, the vehicles are an Obey 9F Cabrio, Declasse Rhapsody, Principe Faggio, and Dinka Vindicator, respectively. After the player finds the vehicle, Agatha will send another text, this time with an image of what the target looks like.

Even though no timer appears at first, the mission cannot be active indefinitely, and a timer will show up if the player takes too long. Once all five thieves hand over their chips, the mission ends and Agatha calls the protagonist to commend them on their good work.

“Not a single loose end, just how we like it.”
— Ms. Baker
“Good work. Very efficient.”
— Alternative call

Fountain Plaza next to the IAA and FIB headquarters. 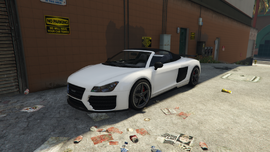 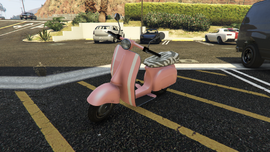 The target's Faggio at the Pacific Bluffs Country Club. 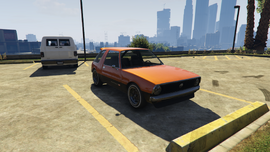 The Target's Rhapsody in Mirror Park.