View source
watch 01:54
Arcane: League of Legends - The Loop
Do you like this video?
Play Sound
“San Andreas take their hair very seriously and, like everything else in Los Santos, half of it isn't real. For a classic fade, rails, tramlines, siderows, shutters and more, visit the original Herr Kutz in South Los Santos or, if you're willing to spend a little more (i.e. add a zero), Bob Mulet in Rockford Hills can craft you a prize coif in minutes.”

In Grand Theft Auto: San Andreas, Barbers become available for use during the third story mission, "Ryder". The types of hairstyles selected may enhance both the player's respect from Grove Street Families members and the player's sex appeal towards girlfriends.

To interact with a barber, the player must enter a barber shop, then walk to a small red halo beside one of the barber chairs. The player is then given a specific selection of haircuts to pick from, and may preview haircuts before they purchase one. Although the player is typically assumed to settle on a haircut on each visit, the player can in fact purchase multiple haircuts in one sitting (haircuts cost 20% more money at the Las Venturas outlet). Like tattoos and unlike clothing, the player must pay again for a haircut that they had prior. Aside from Pay 'n' Sprays and clothes shops, barbers can also remove the player's wanted level. Once the player exits the haircut selection interface, CJ will automatically walk out of the barber shop.

In total, there are seven barbers throughout San Andreas, all categorized into only three types, two of which are only limited to one outlet each.

Reece's Hair & Facial Studio is in Idlewood, Los Santos, and is modelled after a traditional black barbershop. The barber is known as Old Reece and is an affiliate of the Grove Street Families. It is unlocked after completing the mission "Ryder". Next to the barbershop is a tattoo parlor where the player may get tattoos which boost CJ's respect level.

The Macisla Unisex Hair Salon (also known simply as "Barber Shop" by its outdoor sign) is found in Playa Del Seville, Los Santos. Like Reece's Hair & Facial Studio, Macisla boasts a unique interior with a sleek and modernised design, representing a more urban black barbershop/salon and has a unique barber model: a young African-American man with a uniquely patterned haircut. It targets a young African-American crowd with wild hairstyles that black teenagers and young black adults would wear in the early-1990s. The "Macisla Unisex Hair Salon" name is derived from the interior's mirrors, although the exterior implies it is simply known as "Barber Shop".

Other barber shops throughout San Andreas fall into a single group that offer the player the same set of hairstyles, and feature the same interior (a similarly modern interior as Macisla, distinguished by its checkered tile floor) and the same barber model (a Caucasian man with a radical hairstyle, bearing a resemblance to the rapper Vanilla Ice). These barbershops may also target the (at the time) young black crowd with wild hairstyles; but may also target the young suburban white crowd who would try and "act black", thus modelling the barber with a wild hairstyle. The barbers will attempt to talk in urban slang to CJ, as well with Radio Los Santos being played at every shop, and the shops themselves placed in affluent areas of San Andreas, even rural and desert regions for some strange reason. The barber himself is also implied to be a member of the Epsilon Program, including mention of the group and "Kifflom" in speech. The only difference is their exteriors and storefronts, which often assume different names and design. 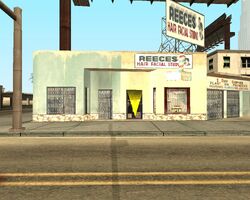 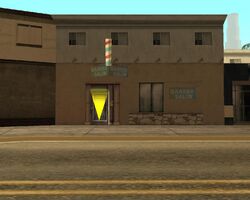 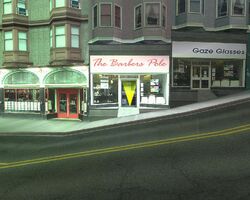 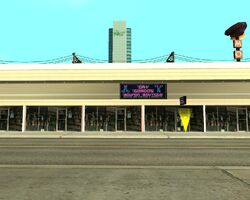 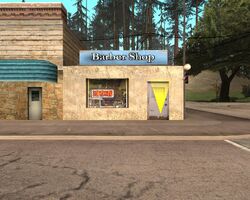 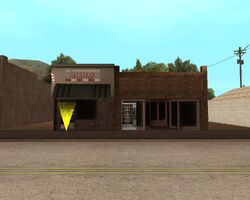 In Grand Theft Auto V, Barbers become available after completing the second story mission, Franklin and Lamar. The hairstyles and facial hairstyles only serve as a cosmetic customization, not affecting the gameplay in any way. There are seven barbers throughout San Andreas.

There are multiple low-end barber shops in the game, such as the Herr Kutz Barber, the Beach Combover Barber, the O'Sheas Barbers Shop, and the Hair on Hawick shop. All of them share the same interior, barber, and haircut options. The haircuts are much cheaper and have a more old-school style.

Barbers in Grand Theft Auto Online are available to the player from the start of the game. All haircuts and other options are purely cosmetic and do not impact gameplay in any way. The selection of cosmetic options is greatly expanded upon, with barbers now offering other items alongside hairstyles and beards, such as eyebrows, face paints, contact lenses, make-up, and more. Subsequent content updates have further increased the available selection, and some have introduced items available only on special occasions, such as the ones added with the Independence Day Special update. While most items are available to both sexes, some are exclusive to one.